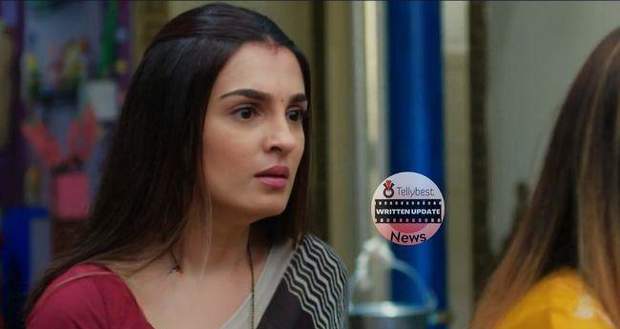 Raavi tells Dhara that she thinks Rishita is jealous of her success and goes inside while Shiva apologizes to Dhara and goes after her.

Meanwhile, Swetha is dancing in her room with earplugs in but she sits on the bed as soon as she hears steps coming in.

Krish comes in and takes the charger he forgot in the room while Swetha stops him and keeps trying to talk to him.

On the other hand, Dev scolds the designers and tells them to follow the interior design as exactly as it's in the pictures while being distracted due to lack of sleep.

Elsewhere, Krish helps Swetha remove her clothing that is stuck on the nail while Kanta's daughter-in-law tells Kanta that she thinks Krish is the father of Swetha's baby.

At the same time, Rishita reaches the godown and gets furious seeing the design that she had rejected and tells the designers to change it to the one she had approved of while they inform her that they were given orders by Dev.

At home, Dhara tells the family that Kanta's daughter-in-law took Suman for a stroll in the park which is shocking while Rishita comes barging in.

Rishita starts berating Dev and degrades him saying that he couldn't even open his own business.

Dhara is unable to hear such things about Dev and shuts Rishita by speaking to her and telling her that Dev cares about her cosmetic business more than she does.

Rishita tells Dhara to not speak in between her and Dev while Swetha speaks up for Dhara to add fuel to the fire.

Rishita starts having a breakdown and locks herself in her room where she starts destroying everything.

The whole family starts begging her to open the door.

Dhara sees Rishita trying to tie one of her sarees to the fan and starts crying while the Pandya brothers manage to break open the door and stop Rishita.

Dev hugs Rishita and tells her that he needs her, Chutki needs her and the whole Pandya family needs her.

Dhara puts her hand on Rishita's head lovingly and Rishita rushes into her arms apologizing.

At the same time, Swetha comes forward saying that she knows a very good counselor who can help Rishita.