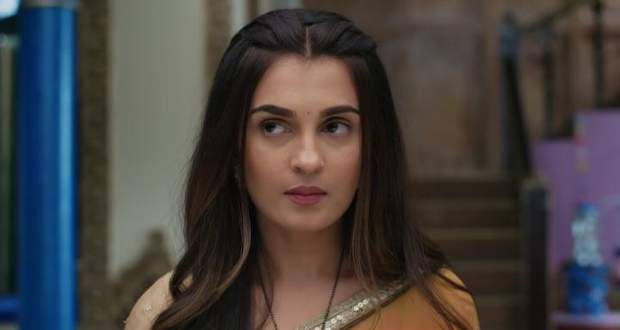 Today's Pandya Store 6th August 2022 episode starts with Raavi disconnecting the call and getting scared to see a silhouette in the house.

Shiva shuts Ravi’s mouth and asks her who was on the phone while Raavi lies to him and decides to call and tell him everything along with others.

The next morning, Dhara finds the kitchen empty of vegetables and gets angry at Raavi for forgetting to do her work.

Dhara comes to the hall looking for Raavi and finds Dev eating breakfast while Rishita comes complaining about Raavi.

Dev offers to bring the vegetables while Rishita tells him that he has never seen a Vegetable seller ever.

Dev convinces Rishita to buy vegetables while Dhara wonders where Suman has gone.

Meanwhile, Suman has come to report Cheeku’s missing mother and hand over Cheeku to an orphanage.

Krish tries to call Shiva to tell him about Suman’s doing but Shiva did not pick up his phone.

Meanwhile, Shiva is following Raavi and sees her talking to two men outside the bank.

Krish once calls Shiva but they could not talk due to poor network however Shiva loses sight of Raavi.

Meanwhile, Dev and Rishita are buying vegetables when Rishita spots a sale at a shop and goes to do shopping without telling Dev.

On the other hand, Shiva spots Raavi again talking to those people and has changed the suit they have given to her.

At the same time, Krish calls Dhara and tells her about Suman planning to send Cheeku to an orphanage.

Dhara is shocked to hear Suman’s plan and tells Cheeku that she will not let him go to the orphanage.

In the meantime, a stampede occurs at the vegetable market and Dev gets worried about not finding Rishita anywhere and goes in search of her.

Later, Rishita comes out of the shop in the middle of the stampede and gets pushed around while looking for Dev.

As Shiva looks at Raavi sitting on a bike with a stranger when Rishita spots Shiva and call him.

Hearing Rishita’s voice, Shiva comes to her aid and takes her to the hospital. Dev sees Rishita going with Shiva and follows him on a cycle.

Meanwhile, Raavi also spots Dev on the cycle and goes after him wondering about the problem.

On the other hand, Suman brings the police to the house and finds it empty.

Just then Gombi comes home and tells Suman about Dhara’s message that she has gone to Ahmedabad to search for Cheeku’s mother.

© Copyright tellybest.com, 2022, 2023. All Rights Reserved. Unauthorized use and/or duplication of any material from tellybest.com without written permission is strictly prohibited.
Cached Saved on: Wednesday 25th of January 2023 12:37:30 PMCached Disp on: Thursday 9th of February 2023 07:40:02 AM