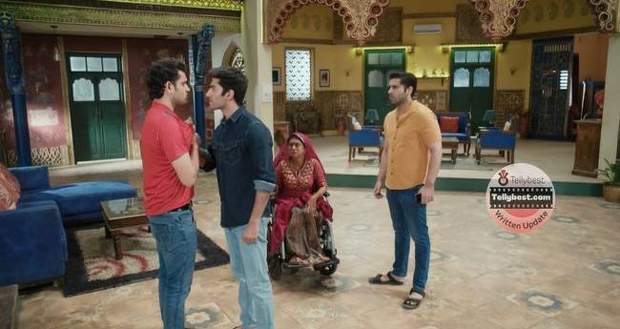 Today's Pandya Store 6th January 2023 episode starts with the doctor diagnosing Chutki and stating that she has suffered trauma from the previous events.

In the Pandya store, Shweta threatens the lawyer to file for her and Krish’s divorce as soon as possible.

In the hospital, Rishita cries while Gautam scolds Dhara for acting like a goddess to save everyone.

Angry Rishita exclaims that she will leave the house the moment Chutki gets healthy.

At the same time, Dev gets a call from his office and his boss fires him because of too many leaves.

Rishita blames Dhara for destroying their lives and states they will not leave the house as Dev does not have any job now.

She expresses her hate to Dhara while she cries tears of sadness and guilt.

Dhara blames herself for Chutki’s condition and promises everyone that she will not do anything else to bring back the ownership of the Pandya store.

Meanwhile, an old lady comes to Shweta and states she has a buyer for her shop.

In the hospital, Dhara cries while Gautam holds Chiku and cradles him to his chest.

She claims that she will focus on only Chiku and Suman now.

Rishita taunts Dhara for finally admitting her priorities in their family.

Dev scolds her and asks her to respect her elders despite being in immense pain.

Dhara walks to Rishita and taunts everyone that she was not the only one who was eating from the Pandya store’s income.

She accepts that the Pandya store is not hers anymore and refuses to fight for it.

Suman looks at her shocked as she didn’t expect her to give up so easily.

Meanwhile, Shweta roams around the lady and requests her to tell about the buyer who will buy her store for 50 lakhs.

However, the lady offers 12 lakhs and taunts Shweta for becoming old by operating the store her whole life.

Shweta contemplates the offer as everyone knows that she took ownership of Pandya Store by fraud.

She asks the lady to give her 2-3 days' time but she asks her to fix her commission of 1 lakh.

Shweta laughs at the poor lady and asks if she knows how many zeroes are in 1 lakh.

In the hospital, the doctor keeps Chutki in observation and demands a 1 lakh fee.

Everyone gets shocked hearing the big amount while Rishita starts to cry loudly.

At home, Shiva informs Raavi that he will fight again to gather money for Chutki’s treatment.

However, she requests him to not fight as she cannot bear to see him hurt.

Shiva defends Dhara and states that this house will break if she leaves taking their decisions.

Meanwhile, Dhara eavesdrops in front of their room and gets shocked to hear Raavi’s accusation.

She blames Dhara for forcing her to leave her job unless Chutki would be okay now.

Raavi requests Shiva to not interfere with Dhara's decision and let her do anything she wants.

© Copyright tellybest.com, 2022, 2023. All Rights Reserved. Unauthorized use and/or duplication of any material from tellybest.com without written permission is strictly prohibited.
Cached Saved on: Wednesday 25th of January 2023 11:10:44 AMCached Disp on: Wednesday 1st of February 2023 09:09:27 PM