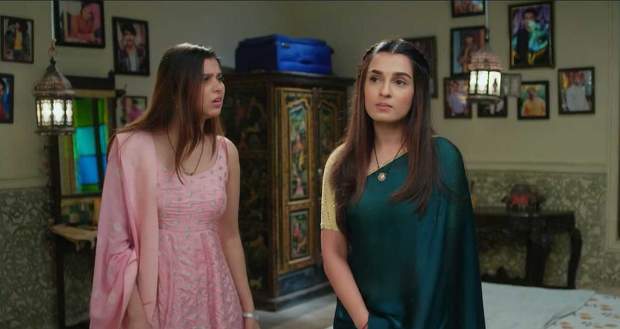 Today's Pandya Store 6th July 2022 episode starts with Dhara and Raavi watching Prafulla feeding Shiva from behind the window and getting surprised.

Dhara starts taking pictures and makes a noise signaling to Shiva that they are outside.

Later, Shiva meets Raavi and Dhara who tell him that he has to attend Rishita's baby shower as it is her command.

However, Shiva tells them to give him time to sort out everything so that he can get the land back and reveal himself in front of the public.

Dhara reveals that Suman has signed the papers but Shiva refuses to sell the house saying that he will sort out everything.

Dhara leaves ordering Shiva to attend the baby shower while Prafulla overhears them and forms a plan.

The next day, Dhara gets Rishita ready while assuring her that Shiva will attend the function.

Meanwhile, Prafulla lights Shiva's items in her house to get rid of the evidence that he was hiding in her house.

Back at the Pandya house, the family misses Shiva while he dresses up as a eunuch and comes with others to bless Rishita.

Prafulla cleans her whole house and further reaches the Pandya house to wait for Shiva to arrive.

Dwivedi's family arrives at Pandya's house to attend the baby shower while the Pandya family is not happy to see them, not even Rishita.

The Dwivedi family tries to act sincerely toward Rishita but she tells them that she doesn't want their blessings or gifts considering their past deeds.

However, Suman tells Rishita to not turn her back on blessings from her maternal family.

Suman picks up one dress and gives it to Rishita telling the Dwivedi family to take back the rest of the things.

Gautam tells them to eat before leaving while Janardan tries to patch up their family problems.

However, Dev firmly refuses saying that he doesn't want such a negative environment for the baby.

Just then, they hear drums interrupting their conversation and look towards the entrance door to see the eunuchs entering the house to give blessings.

Dhara, Raavi, and Rishita get surprised and happy to see Shiva as he greets the whole family in disguise.

© Copyright tellybest.com, 2022, 2023. All Rights Reserved. Unauthorized use and/or duplication of any material from tellybest.com without written permission is strictly prohibited.
Cached Saved on: Monday 21st of November 2022 07:25:55 PMCached Disp on: Friday 2nd of December 2022 04:05:32 PM