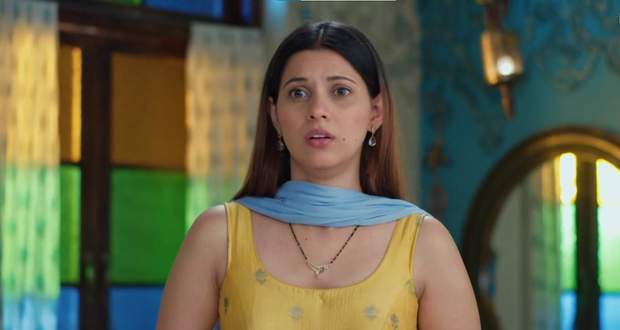 Today's Pandya Store 6th June 2022 episode starts with Raavi walking in the middle of the road recalling the taunts as the vehicles go around her.

At the same time, Shiva notices a jeep coming toward Raavi and tries to alert her.

However, Raavi doesn't hear him and gets bumped by the jeep getting injured.

Shiva rushed to Raavi as she starts crying and tells him that she is the cause of her parent's death.

Shiva tells her that they will talk to Prafulla and takes her there.

Shiva further acts sweet with Prafulla and douses her with perfume.

He tells Prafulla that it is poison and threatens her, to tell the truth but she refuses to say that it was Raavi who came to her.

Shiva reveals that Prafulla is the unfortunate one as, after her entry, her husband stole the mills from Shiva's father leading to his demise.

Meanwhile, Prafulla panics and starts showering herself with water to get rid of the poison.

Raavi scolds Shiva while he reveals to her that it is not poison but a cheap deodorant.

Shiva berates Prafulla and takes Raavi away as she shouts to Prafulla that it is deodorant.

Later, at Pandya house, Shiva sees the lights turned off and tells Raavi to switch on the main switch.

Elsewhere, Dev is standing holding the wires of the AC while a scorpion is near his hand unnoticed.

However, as Raavi turns on the main switch, Dev gets electrocuted and shouts.

The family members rush to him while she says that he got electrocuted and questions who turned on the main switch.

Raavi starts apologizing saying that she is at fault and calls herself unlucky for the family.

Just then, the scorpion falls from the wall and goes out of the window which shocks all the family members.

Rishita starts thanking Raavi saying that had Dev not gotten electrocuted, the scorpion should have bitten him.

Elsewhere, Prafulla goes to drama actor Hari and convinces him to play a role in her plan.

Back at the Pandya house, the family takes Raavi to Suman and requests Suman to inform her how her parents died.

Suman finally reveals to Raavi that her father was a drunkard and that he and his wife died that day due to drinking and driving.