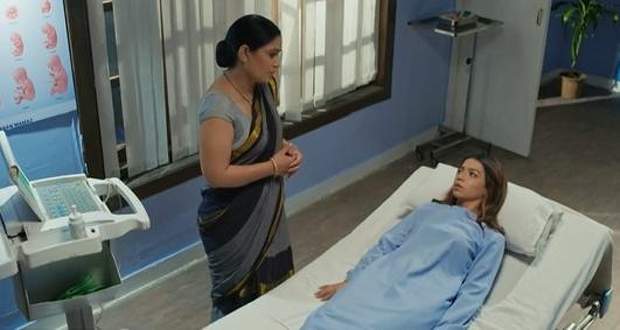 Rishita informs Dev that she has an appointment with the doctor the next morning for which Dev denies coming along.

Meanwhile, Raavi gets to know that Shiva hasn’t agreed to marry her. Dhara is planning to get him kidnapped to bring to the wedding.

In her excitement, Raavi leaves the kitchen swaying across the verandah where she comes across Shiva.

While Shiva goes to bypass her, he accidentally collides with Raavi, and the money in her hand drops down.

Shiva becomes suspicious of Raavi when she hurriedly hides the money, however, Raavi makes Shiva run away by portraying the scene as Shiva is trying to get close to her.

The next morning, Rishita and Dev together leave the house for the hospital as she stands rigid on her decision of aborting the unborn baby.

All the events since the news of the baby have been disclosed reoccur to Rishita one by one getting her emotional.

However, she goes to the doctor on her turn who recommends not aborting the child as the pregnancy is normal.

Being it Rishita’s decision to abort the child, the doctor asks her to sign the procedure form.

With the pen in her hand and eyes on the papers, Rishita could see Dev from the moment when he had received the news.

The vibrance, brightness, and happiness that had reflected on his face made Rishita stop for a moment and rethink her decision but nonetheless, she signs the papers.

Further on, Rishita is taken for the ultrasound before the abortion. The doctor shows Rishita her baby on the screen.

The mother's conscience in her mind is gradually waking up, calling her to rethink her decision.

As Rishita looks around the rooms, she sees many baby posters which display the different stages of the pregnancy getting Rishita almost teary-eyed.

At the same time, the doctor makes Rishita hear the heartbeat of the baby in her womb which leaves Rishita awestruck.

Meanwhile, at the Pandya house, Suman asks Dhara to pack Rishita’s luggage and throw it out.

Suman states that if Rishita doesn’t want to give birth to the heir of this house, she doesn’t want her in the house as well.

On the other hand, in the hospital, Rishita lays down on the hospital bed, her mind stuck in a trance where she can only remember the joy and the happiness the baby has bought to the family.

The nurse prepares the injection which catches Rishita’s attention and becomes the breaking point of her rigid stance.

Rishita pulls the injection out of the nurse’s hand and throws it away declining to abort the child.

At the same time, Dev also reaches the hospital feeling guilty to leave Rishita alone in her pregnancy but there he gets to know about Rishita backing away from her decision.

Further on, Rishita returns to the house with a drum in her hand, beating it loudly.

The family looks at Rishita strangely as if she is celebrating the abortion of her child but when Rishita asks them to get ready to welcome the new baby, they all go on cloud nine.

© Copyright tellybest.com, 2020, 2021. All Rights Reserved. Unauthorized use and/or duplication of any material from tellybest.com without written permission is strictly prohibited.
Cached Saved on: Saturday 28th of May 2022 08:25:58 PM