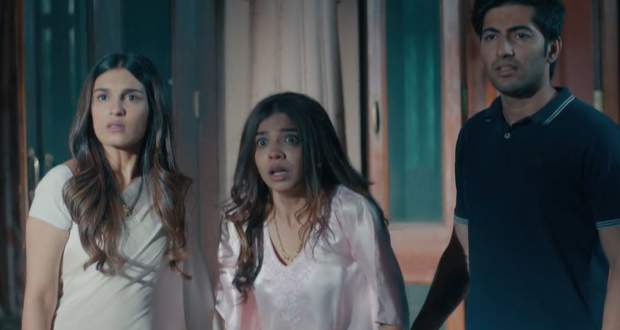 Today's Pandya Store 6 May 2021 episode starts with Rishita getting scared as she a woman in a white saree holding a candle.

Rishita starts screaming at the top of her throat and makes everyone frightened.

Later, Gautam and Dhara try to console Rishita by telling her maybe she misunderstood something else as there is nothing like evil spirits in the world.

At the same time, Shiva takes the advantage of the situation and tries to scare Rishita more which makes Dev frustrated with Shiva and he asks him to leave.

Further, Raavi grows suspicious of Krish as she sees make-up on his face.

Meanwhile, Krish escapes by telling Raavi that she should be with Rishita right now as he heard her screaming.

In the twist of events, Shiva and Raavi share a romantic moment.

But, later Shiva with his humorous mind tries to scare Raavi and she falls into his witty trap.

Further, Pandit tells Gautam that it is mandatory for all the family members to be present for the pooja and there must be no interruption as then all the effort would go in vain.

Upcoming Pandya Store episode update: Rishita taunts Raavi for interrupting in between her and Dev.