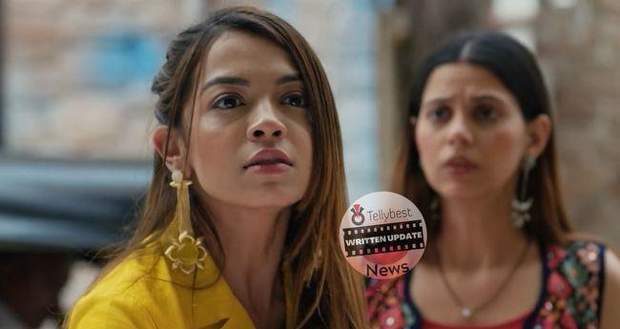 However, Rishita gets angry and tells her to leave.

At night, Suman, Dhara, and Gautam discuss taking Rishita to a counselor once she is ready while Swetha is overhearing their conversation.

Suman tells Dhara to make sure that Rishita doesn't feel that Chiku is given more importance than Chutki which is what triggers her the most.

On the other hand, Raavi sees unsettling pictures of herself posted by some trolls who have hacked her account and gets distressed.

Shiva comes there and asks her what is happening while Raavi cries as she shows him the pictures and the comments of the trolls.

At the same time, Rishita wonders when she became so weak and thinks about how will she get cured when her own family is against her, even her husband.

Back in Raavi's room, Shiva comforts her saying that he loved her and that the whole family is with her while informing her that they will take help from Krish and that if that fails, they will go to the police station.

On the other hand, Rishita turns to look for Dev and gets shocked to see the whole family sitting on the floor of her room.

She wakes all of them up and asks them why they're sleeping in her room but all of them make up excuses.

Rishita tells them that she knows why they're in her room and promises that she won't try to end her life.

However, Suman smiles as she tells Rishita it is her punishment to sleep with the snoring sounds of the family members.

Rishita gets happy as she covers the family members with a blanket and goes to sleep with a smile on her face.

The next morning, Suman tells Swetha that she can go back to her parent's house while Swetha thinks that it's time for her drama.

Rishita comes with her baby at the same time and Chiku starts crying which makes Rishita think that Swetha is doing something to make Chiku cry.

At the same time, Shiva and Raavi go to Krish for help and he gives them instructions on what to do while informing her that they have to file a complaint to the cyber security.

Back inside the house, Swetha tells Dhara to take care of the baby while she makes the food for the family.

However, Suman tells Swetha even if she does all the chores, she will still have to take care of Chiku.

On the other hand, the police come outside the Pandya house where Krish, Shiva, and Raavi are standing and tell them that they are here to arrest Raavi for fraud of 1,10,000 rupees.