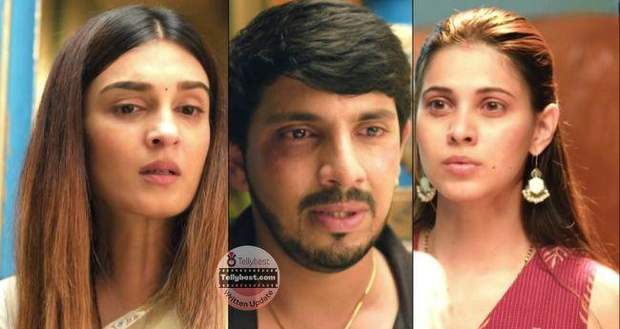 Today's Pandya Store 7th December 2022 episode starts with Suman thinking if Swetha’s words will come true and if her family is breaking apart.

Dhara who was crying near Suman runs towards her after hearing this and promises Suman that she will make Raavi come back at any cost.

She even informs Suman that she is not upset with Rishita’s words as she was right Dhara was blind to Chiku’s love.

Hearing this, Gomby tells Dhara that it is all right as Dhara has understood this who just looks at Gomby with moist eyes.

On the other hand, throwing a stone at the Pandya store, angry Swetha vows she will take revenge on the Pandya family by breaking it into bits.

Happy Dhara puts her hand on Raavi and Shiva’s faces but they vanish since it was just their daydream.

When Dhara comes to the hall, she meets happy Krish who gives Dhara Chiku to hug but after a while, Krish’s image also fades away.

Elsewhere, in Swetha’s home, Harikishan questions Jhankana why she is being heartless now but Jhankana orders him not to bring Swetha home otherwise she will never learn from her mistakes.

In the meantime, Shiva is standing outside when he finds his alter ego taunting him for doubting his wife and his bhabi (Sister-in-law).

The alter ego even questions Shiva if he got forgiveness from Raavi but Shiva just recalls Raavi’s words about him always doubting her with tears in his eyes.

Dhara arrives at the same time and sits near Shiva after giving Shiva a cup of tea while she quietly sips her tea.

On the other hand, Shweta, who is freezing with cold, is walking with crying Chiku, and later she finds a place to sit with a basket in her hand for begging.

In the meantime, throwing his cup away, Shiva puts his head on Dhara’s lap and starts sobbing.

While Shiva mutters that he does not deserve Dhara’s forgiveness, Dhara replies that she is a mother and will always forgive Shiva.

Shiva however adds that his wife Raavi will never forgive him in between sobs.

Elsewhere, Raavi is walking away when she notices Shweta freezing and tells Swetha coldly that she has broken her relationship with Shiva just as she wanted.

Meanwhile, Shiva confesses to Dhara about how he started doubting Raavi and Arnav who in return thinks Arnav is the main reason for Ravi and Shiva’s broken relationship she needs to do something.

On the other hand, looking at Raavi, Shweta thinks she will break every relationship Raavi has with the Pandya family.