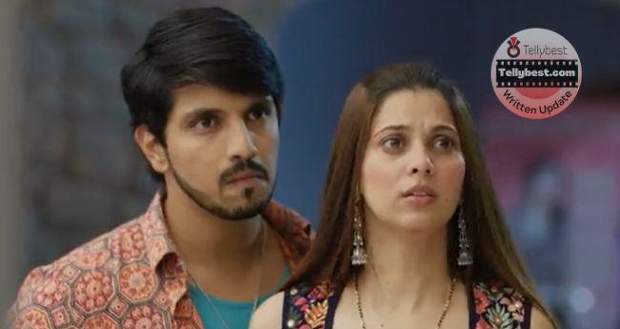 Today's Pandya Store 7th January 2023 episode starts with Dhara getting shocked to hear Raavi’s advice to Shiva which shocks everyone.

She reminds herself that even though she has let go of her dream of bringing Pandya’s store back, she will not let her family crumble.

Later, while everyone is sitting in the hall in silence, Dhara arrives there and orders Dev to take food for Rishita.

When Dev looks surprised, Dhara offers some cash to Dev.

Dev then asks Dhara why she is caring for Rishita but Dhara replies that Rishita never meant those harsh words.

Dhara even informs Dev that she is guilty but she only wants everyone’s happiness and Dev hugs Dhara tightly.

Seeing this, one by one other Pandya brothers also join in the hug, bringing a soft smile to Gautam’s face.

The next morning, when Shiva enters the kitchen for breakfast, he is surprised to see the empty kitchen.

Afterward, Shiva finds Dhara selling dhosa outside the house but before he can urge her to stop it, the rest of the Pandya family also arrive there.

Suman praises Dhara for taking this initiative and Dhara replies that one Gujrati can never stop being a business person.

While Dhara is busy serving the customers, Dev arrives there and tells everyone that he should have made an insurance policy for Chutki too since the hospital is very expensive.

When Dev reveals that he needs 50k right now, Raavi urges him to not take stress as he can take money from her account.

Meanwhile, in the hospital, Rishita asks the doctor how can a little child develop mental trauma to which the doctor replies that though a little baby cannot express her emotions, she can hear and understand everything.

Back in Pandya’s house, Shiva gets a call from the owner who asks Shiva if he is available for an evening match and Shiva agrees.

Once Shiva cuts the call, Raavi begs him not to go but Shiva announces that if Dhara can sell the dhosa, he can also earn for Chutki.

Raavi even urges Dhara to talk to Shiva but she also refuses as she does not want to interfere in Raavi and Shiva’s private matters.

This angers Raavi and she accuses Dhara of not helping because Raavi did not support her.

However, Dhara reminds Raavi that Raavi herself does not want Dhara’s interference in their personal matters so Shiva can do whatever he wants.

Hearing this, Raavi walks away angrily whereas Shiva goes to fight.

Afterward, Suman urges Dhara to give her a dhosa for breakfast which makes Dhara very happy and Dhara then urges Gautam to go on the job hunt.

When Gautam asks Dhara if she is still angry at him, Dhara tells him that he is the only one who has given her this idea.

Afterward, Dhara gives her first income to Suman and takes her blessing while Suman looks at Dhara with emotional eyes.

On the other hand, in a hospital, Dev and Rishita get shocked as the nurse orders them to bring fifty thousand worth injection.

Meanwhile, Shweta arrives at Dhara's shop to mock her and she even orders Dhara to make dhosa for her.

Shweta even offers some tips but Dhara takes even more money from her for ruining her cloth.

However, before leaving, Shweta reveals to Dhara about Pandya's store getting sold in just two days which shocks Dhara and she runs inside the home to tell everyone.

While Dhara tells Gautam about this, Dev arrives there to reveal that Chutki needs 50k worth injection.

© Copyright tellybest.com, 2022, 2023. All Rights Reserved. Unauthorized use and/or duplication of any material from tellybest.com without written permission is strictly prohibited.
Cached Saved on: Wednesday 25th of January 2023 09:25:17 AMCached Disp on: Tuesday 31st of January 2023 07:17:45 PM