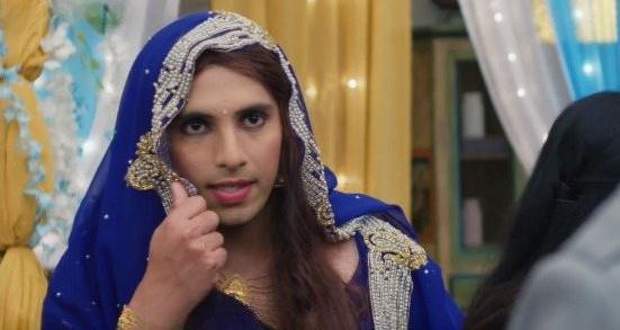 Further, Prafulla informs the police about Shiva and takes them with her.

Later, Shiva asks the family members to dance for Rishita's baby and gets money from everyone around.

Prafulla arrives with the police and crashes Rishita's baby shower.

Gombie notices Shiva (the dancer) hiding upstairs and tries to follow him but Dhara stops him.

However, Dev thinks that something is cooking between Gombie and Dhara while Prafulla creates a scene at the baby shower.

Prafulla says that they committed fraud and got their shop renovated from the compensation money.

Further, Prafulla claims that Shiva is alive and refuses to leave even after Raavi tries to kick them out.

The police search for Shiva in the Pandya house and check every room and corner.

Later, Shiva is nowhere to be found as he is hiding below Rishita as a mattress and Rishita rests on him.

The police try to search Rishita's room and fail to find Shiva which shocks Prafulla.

Dhara explains how Prafulla has gone mad after Shiva's death and is after their life.

Later, Gombie gets suspicious and orders to close the windows and doors.

Gombie confronts Dhara for not telling him the truth and lying to them throughout.

Further, Dhara confesses to Suman that Shiva is alive.

On hearing Dhara, Suman is shocked to attend the truth about Shiva.

© Copyright tellybest.com, 2020, 2021. All Rights Reserved. Unauthorized use and/or duplication of any material from tellybest.com without written permission is strictly prohibited.
Cached Saved on: Saturday 1st of October 2022 10:23:34 PM