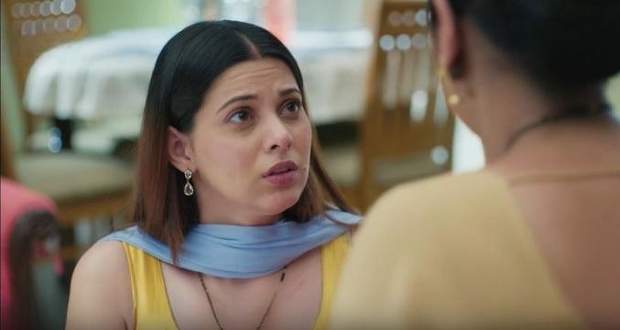 Today's Pandya Store 7th June 2022 episode starts with Suman revealing to Raavi that her parents died due to her father driving while being drunk.

Suman says that she had warned Prafulla to not marry her sister to Raavi's father but she didn't listen and ended up in this situation.

However, Raavi still blames herself saying that she shouldn't have become sick, and runs to the terrace.

Suman realizes the impact of her words and asks how to lift Raavi's mood.

Shiva goes after Raavi and tries to lift the mood by asking her out on a date.

However, she tells him that they'll go later after which Shiva lifts her bridal style and threatens to take her downstairs in front of the family in his hand.

Raavi feels flustered and agrees when they hear Rishita shout and rush downstairs.

Meanwhile, Rishita starts laughing hysterically and makes Raavi put her hand on the belly to make her feel the baby's kick.

Rishita tells Raavi that babies are angels of God and assures her saying that the baby doesn't think that she is unlucky.

All the family members start touching Rishita's belly to feel the baby kicking and when it's Dhara's turn the baby doesn't kick breaking Dhara's heart.

However, Rishita tells her that the baby will kick and a moment later, the baby kicks bringing tears of happiness to Dhara.

The family starts celebrating and congratulating each other while Prafulla sees everything from far away.

Prafulla thinks that such a happy moment won't come to her as Raavi is upset with her and says that she will do anything to go through with her plan.

Just then, Shiva asks Suman if he can take Raavi out to have Chaat while Rishita complains and gives her a tiffin telling her to bring Chaat for her also.

Prafulla's ally goes to Raavi dressed as a Baba and starts accusing her of being a walking misfortune.

He tells Raavi to go back to her aunt and repay her for her deeds and leaves while warning her that she is a danger to her husband.

Raavi thinks that the Baba is a psychic and feels worried for Shiva.