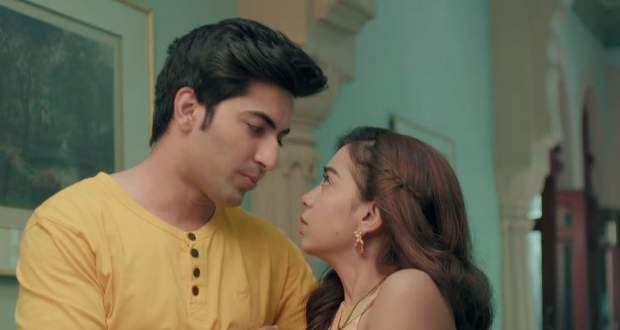 Today's Pandya Store 7 May 2021 episode starts with Raavi and Shiva arguing in the morning.

Meanwhile, Dev persuades Rishita to stay in the mansion for a few more days.

Krishna gets tired of cutting wood and tells Shiva that he wants to be out of the plan as he is tired of the punishment but Shiva scolds him.

Raavi sees the locked room and gets scared while Dev calms her and has a romantic moment with her.

Krish sees the bicycle girl and goes after her while Raavi asks Dev for a kiss.

Dev refuses and she starts getting upset with him.

Elsewhere, Raavi requests Dhara to do the pooja in two days and return home while she cuts her finger accidentally.

She is on her way to get the wound bandaged but stops seeing Shiva.

He notices her and goes to see her where he sees that she has injured her finger.

He tends to her but she gets angry upon his teasing and leaves from there.

Dev is about to kiss Rishita but stops seeing Raavi.

Rishita notices her and starts taunting her making her cry while Dhara comes there.