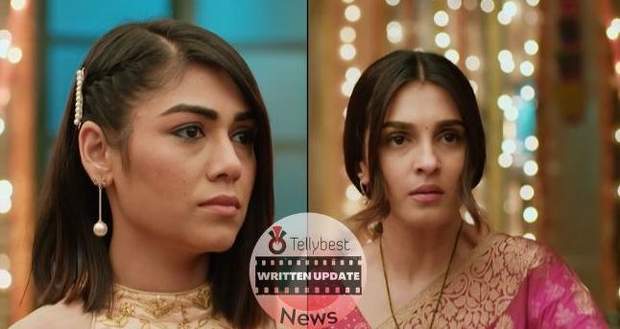 Raavi tells everyone that she asked Arnav to meet everyone, but he walked away as he had unfinished work.

Shweta even adds that she thinks Shiva doubts Raavi but everyone yells at her for accusing Shiva like this.

Dhara angrily reminds Shweta that she does not know Shiva so she should not pass judgment.

Even Suman also scolds Shweta for trying to ruin Shiva’s image but Shweta cryingly announces that everyone always blames her for whatever happens in the house.

Gautam also tries to calm the situation by claiming that he is sure Shiva must have a huge reason for throwing the shirt away like this.

After Gautam and Krish walk away to find Shiva, Shweta rubs more salt on Raavi’s wound by claiming that she is sure Shiva doubts Raavi.

Suman orders Shweta to close her mouth and Raavi runs away from there in tears.

Dhara and Rishita try to run after but Suman orders them to give Raavi some space.

On one hand, Raavi breaks down in tears in the room; on the other hand, Shiva is consuming alcohol to numb his pain while recalling Raavi greeting Arnav happily.

He then mutters under his breath angrily that today Raavi has shown him his place in her life by giving him the cheap shirt.

Raavi even tries to call Shiva but frustrated Shiva just switch off his phone.

Meanwhile, Suman exclaims that this Diwali is the worst Diwali in the Pandya family with a gloomy expression.

However, Shweta, on the other hand, whispers that from now on she will make sure that the Pandya family will not get any rays of happiness.

Rishita however questions Suman if Raavi and Shiva’s relationship will recover from it again or not and Suman replies optimistically that she knows everything will get back to normal.

Later, Gautam, Krish, and Dev find Shiva drinking in an isolated factory, and Gautam scolds Shiva for running away like this.

Krish urges Shiva to give him one drink but Dev denies it as Krish is very young.

Krish however yells that he already has a child of his own but Gautam scolds them both.

On the other hand, Raavi tells herself that neither Shiva does anything to recover their relationship nor he lets Raavi repair it.

Dhara then gets a call from Krish who informs her about Shiva driving alone and Raavi announces that she cannot live with Shiva anymore.

Meanwhile, Gautam calmly tells Shiva that Raavi is a working woman so now she is bound to have male friends.

Gautam further adds that Shiva should let go of his insecurity and repair the relationship with Raavi.

© Copyright tellybest.com, 2022, 2023. All Rights Reserved. Unauthorized use and/or duplication of any material from tellybest.com without written permission is strictly prohibited.
Cached Saved on: Monday 21st of November 2022 06:01:07 AMCached Disp on: Friday 9th of December 2022 03:41:34 AM