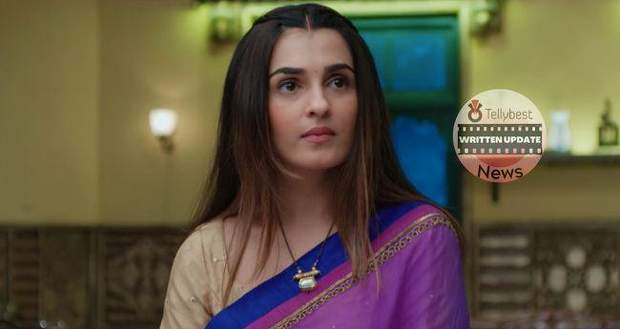 Dhara tells Shiva that Raavi will be coming to the house for the dance practice which excites Shiva a bit but he manages to put on a poker face.

Raavi comes to the house and makes eye contact with Shiva but both do not talk with each other a bit which Dhara notices.

As Dhara asks Swetha to come and practice her dance with Krish, Rishita asks Swetha why she was roaming in the market earlier.

Dhara assures that Swetha was at home while she was looking after Chikoo the whole time.

However, Rishita gets angry and says that Dhara only cares about Swetha and does not care about her anymore as she forgot to bring clothes for her.

Dhara tries to calm down Rishita and says that she has her own reasons to trust Swetha and reminds Rishita how she spent so much on her clothes.

The next day, Gautam and Dev get busy in packing things and moving them onto the bus as they have to leave for the resort.

Rishita checks Swetha’s room for clues related to her hidden plan as she finds her very fishy but does not get anything definite.

Swetha prepares the fake jewelry with which she plans to exchange the real jewelry once she gets the opportunity.

Suman calls Gautam and Dev and makes them dig a hole underground inside her room where she can bury her jewelry.

Swetha catches a glimpse of that and goes to Dhara so that she can check where the real jewelry is kept.

As Dhara informs Swetha that all the jewelry is kept with Suman, Swetha panics as she just saw Suman burying everything.

Later, Swetha asks Suman about the jewelry to which she replies that she has them with her and will give them when needed.

Raavi leaves for the office as she has to work overtime which upsets Shiva and he leaves without saying anything.

As the time to depart arrives, Raavi calls and informs that she will be late to which Shiva replies that she can come directly to the resort without batting an eye.

However, Dhara asks Shiva to wait for Raavi and come with her once she returns.

Rishita determines that she will expose Swetha’s plans after she causes any mishap at the wedding.

© Copyright tellybest.com, 2022, 2023. All Rights Reserved. Unauthorized use and/or duplication of any material from tellybest.com without written permission is strictly prohibited.
Cached Saved on: Monday 21st of November 2022 07:28:12 AMCached Disp on: Tuesday 29th of November 2022 11:06:42 AM