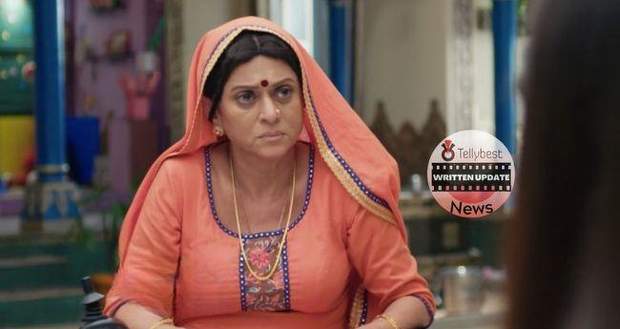 Today's Pandya Store 7th September 2022 episode starts with Raavi crying while saying that she is innocent to the police officers.

The Pandya family comes outside and cries while Raavi says that her social media was hacked and she was coming to the cyber security.

Rishita asks Raavi when she got the photo shoot done and Raavi reveals that her photos have been edited and that her account is handled by someone else.

Meanwhile, Swetha gets a call from her friend who asks her when she's going to get free from there.

Swetha says that the Pandya ladies are smart and her friend suggests she cause commotion in the kitchen.

Back outside, the police tell the Pandya family that they will investigate and leave while Suman starts scolding Raavi and blaming her.

Rishita tries to speak in support of Raavi but gets silenced by Suman's glare.

Swetha comes there and suggests Raavi make a new account but Rishita says that their main solution is to catch the hacker.

Elsewhere, Dhara takes the water outside while Swetha overheats the oil to be used for massaging the babies, especially Chutki to create an argument between Dhara and Rishita.

At the same time, Shiva calls Raavi and tells her to meet him by the back door without informing anyone.

Dhara sets the water temperature while Swetha takes the bowl of normal oil and sits far away.

Suddenly, Chiku starts crying and Dhara takes him while scolding her for not being careful.

Meanwhile, Rishita touches the oil and is about to shout at Dhara but realizes that it cannot be Dhara as she was even cooling the water to a moderate temperature.

Rishita recalls all the moments and realizes that Swetha is the one trying to create problems in the family.

Just then, Rishita says that she's thinking of going to the counselor and asks Swetha for the number but she states that she does not have it right now.

However, Dhara comes forward saying that she will give Rishita the counselor's number, and tells her that she is happy to see Rishita taking the first step.

Rishita and Dhara spend an emotional moment while Suman assures Rishita that the whole family will take care of Chutki.

Swetha interrupts and asks Dhara if she won't train her or take care of Chiku.

© Copyright tellybest.com, 2020, 2021. All Rights Reserved. Unauthorized use and/or duplication of any material from tellybest.com without written permission is strictly prohibited.
Cached Saved on: Saturday 1st of October 2022 10:37:10 PM