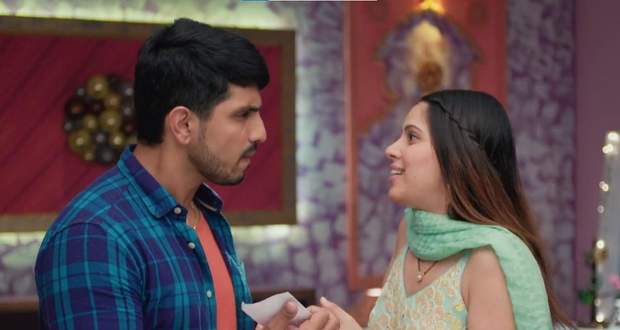 Today's Pandya Store 8th August 2022 episode starts with Suman bringing the police to the house and asking about Suman and Chikoo.

However, when Suman isn't able to find both of them, she demands Gautam to find her when he gets the message from her that she's going to Ahmedabad with Chikoo.

Meanwhile, Shiva sits at the tea stall angrily while Rishita apologizes for the false alarm.

Back at the Pandya house, Gautam keeps trying to contact Dhara whose phone is switched off while Suman scolds Krish for being a tattletale and punishes him.

At night, Raavi is babbling about Dhara's incident to Shiva while he gets serious and asks her where she was in the morning.

However, Raavi tells him that she has a surprise for him and gives him the envelope containing a cheque of 1.5 lakhs and a cup with her face on it.

In her happiness, Raavi tells him without thinking that she earned that money in 1 day while he couldn't do that in one month.

He throws the mug breaking it and tells her that he won't be silenced by her money and states that he was doubtful since the previous night when she had a secret call without informing him.

Raavi feels hurt and tells Shiva that she wasn't hiding anything but was waiting for the right time to tell him anything.

However, Shiva brings up the boy from the morning and asks her about it while she feels her heart broken at the lack of trust from his side.

Shiva keeps on arguing blinded by his anger while Raavi shouts at him that the man from the morning was a model.

Raavi picks up the shattered mug and leaves while Shiva states he was hurt by her lying and was not doubting her.

Elsewhere, a middle-aged couple is seen enjoying Raavi's videos while Chikoo's mother is seen lying on one of the beds.

She regains consciousness and the nurse informs the couple that their daughter Sweta has regained consciousness.

At night, a food delivery comes and Raavi solemnly reveals that she had ordered it earlier when she didn't know about the situation in the house.

Suman scolds Raavi while Raavi gives her the cheque of 1.5 lakhs and surprises her.

Dev and Suman praise Raavi while Rishita and Shiva get jealous and leave from there saying they're not hungry.

Soon, all the family members have some situation due to which they cannot eat the brought bought by Raavi which makes her feel alone.

© Copyright tellybest.com, 2020, 2021. All Rights Reserved. Unauthorized use and/or duplication of any material from tellybest.com without written permission is strictly prohibited.
Cached Saved on: Monday 8th of August 2022 09:14:38 AMCached Disp on: Sunday 14th of August 2022 12:06:22 PM