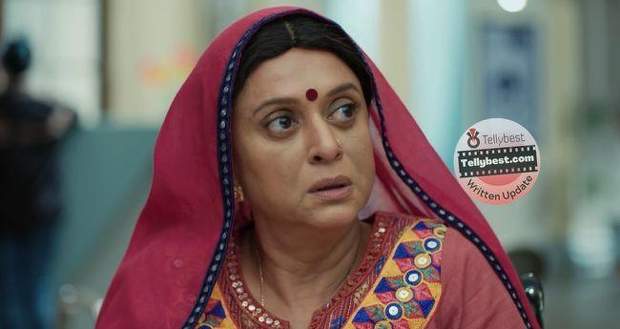 Today's Pandya Store 8th January 2023 episode starts with Dhara asking Dev if Chutki and Rishita are okay or not.

Dev informs everyone that he needs 50k for Chutki’s injection and Dhara urges him not to worry as everyone will arrange the money.

Even Raavi tells Dev that there is 50k in her account but today the bank is closed and she does not use net banking.

Meanwhile, recalling the man who promised to pay 10k per match-winning, Shiva decides to fight and walks away from there.

After Shiva walks away, Dhara urges Dev to not worry they will arrange the money somehow and Dev just nods.

Dhara then brings some cash to Dev after searching the kitchen for money and Dev runs to the hospital.

In-room, Raavi hugs Shiva from behind for listening to her and not going to fight but Shiva orders Raavi to remove her hands.

Turning towards Raavi, Shiva firmly announces that he needs to earn for the family so he will go to fight.

When Shiva announces that this is not the first time he is going to fight, Raavi tells him that she wants him to do normal jobs like Gomby or Dev.

Meanwhile, Gautam is busy selling some grocery items to earn a profit whereas Krish begs his boss to give him some advance money who only gives Krish 2k.

Back in Pandya’s house, Suman orders Rishita to tell the doctor to start the treatment and they will deposit the rest of the money soon but Rishita announces that she has done everything.

At the same time, Dhara gives Suman the first earnings from her shop but Suman advises Dhara to keep this money at the temple since it is her first-ever earning since they have lost the store.

After placing the money near god’s feet, Dhara prays for Chutki’s well-being.

Meanwhile, Raavi calls Shiva to know his whereabouts but instead of cutting the call, Shiva picks up by mistake.

Raavi overhears Shiva’s owner telling him that this opponent is very dangerous and has never lost any game and if Tony, the opponent thinks he is losing, he will hit Shiva where it will hurt the most.

However, Shiva demands 50k for this fight and the owner agrees.

This makes Raavi nervous and when she is running to tell Dhara, she collides with her causing the aarti thali to fall.

Looking at the aarti thali, Dhara scolds Raavi for this as it is a bad sign for the family, and panicked Raavi starts telling her how Shiva has promised to gith a very dangerous opponent.

However, Dhara does not pay any attention as Dev has also asked her for more money and Dhara runs to arrange it.

Shiva starts losing the fight against Tony whereas Dev and Raavi both urge Dhara to go with them.

Thinking Chutki is more important, Dhara denies Raavi which hurts her as she thinks nobody cares for them.

Later, Raavi begs the bouncers to let her enter whereas Shiva stands up to fight for his family despite being injured.

Though Shiva wins the match, Tony hits him hard from behind resulting in Shiva getting unconscious.

Raavi notices Tony run away which scares her and she runs towards the boxing ring.

© Copyright tellybest.com, 2022, 2023. All Rights Reserved. Unauthorized use and/or duplication of any material from tellybest.com without written permission is strictly prohibited.
Cached Saved on: Wednesday 25th of January 2023 08:46:44 AMCached Disp on: Wednesday 1st of February 2023 09:51:01 PM