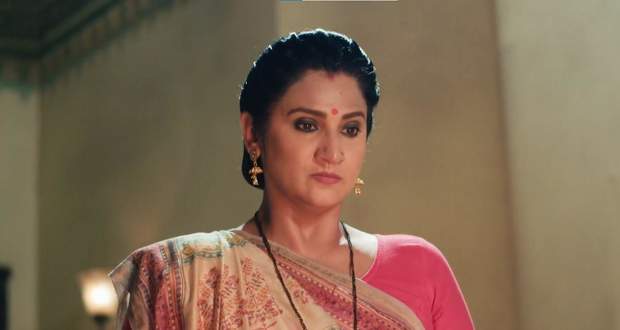 Today's Pandya Store 8th July 2022 episode starts with Gautam forcing Dhara to reveal that Shiva is alive which shocks both Suman and Dev.

Suman recalls the lady in the blue dress and realizes that it was Shiva in disguise.

Suman scolds Dhara for hiding the truth from her and asks for Shiva when Shiva calls out to her from the stairs.

The family gets emotional and has a reunion with a lot of crying and hugging.

Further, Gautam reveals that all three daughters-in-law of the family were together in this.

Suman scolds them while Gautam orders Dev to call the police so that they can surrender Shiva to them.

However, Dhara stops him and tells him that it is not necessary as she is planning to sell the Pandya house so that she can return the compensation money to the government and bring back Shiva with pride.

However, Shiva refuses to sell the house and tells the family to come up with something to take back the land from Jeevanlal.

At last, Gautam gives the family 24 hours to come up with something, and if not else, they will take Shiva to the police station.

Later, the police search Prafulla's house for Shiva while Raavi and Dhara come there to scare her.

They show Prafulla a picture in which Shiva is eating and she is standing beside him and blackmailing her saying that if Shiva gets arrested, she will also go behind bars.

Fearing for her safety, Suman does drama and makes the police officers leave the house.

Further, Kamini calls Prafulla and asks her if she's sure Shiva is alive to which Prafulla replies that she is a hundred percent sure.

Meanwhile, the Pandya family is discussing how to scare Jeevanlal and take back their property.

However, Prafulla is also overhearing their conversation from behind the door.

Rishita forms a plan and tells the family that they will all dress up as ghosts and scare Jeevanlal to death.

Suman agrees with the plan and tells the family to go forward with it.

© Copyright tellybest.com, 2020, 2021. All Rights Reserved. Unauthorized use and/or duplication of any material from tellybest.com without written permission is strictly prohibited.
Cached Saved on: Monday 8th of August 2022 01:35:02 PMCached Disp on: Sunday 14th of August 2022 11:41:14 AM