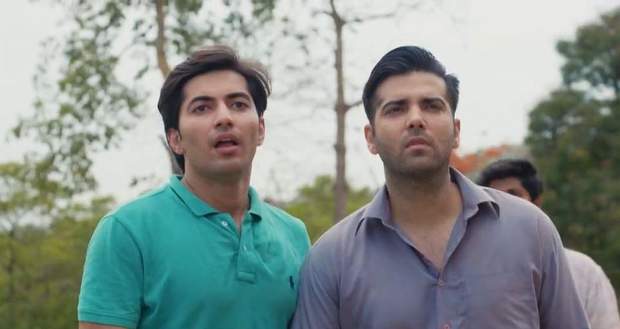 Today's Pandya Store 8th June 2022 episode starts with Dev talking to workers on call and asking if they can work on the Pandya store now and get the salary in parts.

Rishita overheard him and blames herself while Dev comforts her and lifts her mood saying that they can create a mobile grocery store.

Elsewhere, Dhara checks stock in the house and tells Gautam that it's going to last only for a week at most.

Dev tells Rishita that he might have to start working while Rishita suggests he present the idea of a mobile grocery story to Gautam.

Back in Gautam's room, Dhara finds documents of a property they got long ago and gets happy giving them to Gautam.

At the same time, Shiva comes to his room and scolds Raavi while she keeps going away from him.

However, he makes her sit down and tells her that he's not going anywhere and won't let her go anywhere too as he puts his head in her lap.

Later, Gautam and Dhara show the property documents to the family and get happy while Rishita convinces them to keep one acre for a farmhouse.

The next day, Dev and Gautam go to Mansukhbhai to sell their property while je reveals to them that a man named Jeevanlal is also calling himself the owner of the land.

They both go to see the property and start destroying the board of Jeevanlal that is there.

Just then, a goon comes there and tells them that the land belongs to Jeevanlal but gets beaten by Gautam.

However, two more goons come there on a bike with weapons scaring Dev and Gautam.