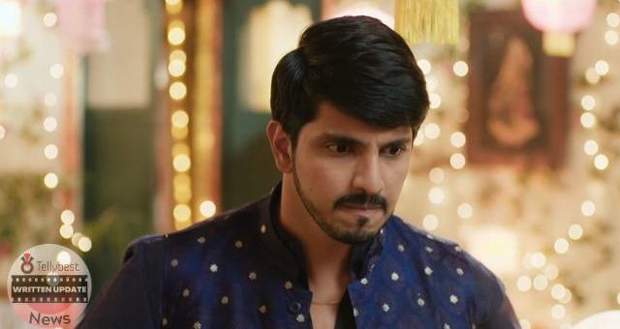 Meanwhile, Krish informs Shiva that he knows Shiva will always be there to help Raavi, and frustrated Shiva announces that now his younger brother is also giving him marriage advice.

This makes Krish angry and he and Shiva get into a huge argument with each other while the others look stunned.

During the fight, Krish tells Shiva that Shiva is ruining his marriage with Raavi.

Frustrated Shiva then runs after Krish to harm him with a bear bottle.

On the other hand, Rishita advises Raavi to grab Shiva’s collar and confront him about the burned shirt.

While Raavi looks confused, Dhara urges Rishita not to give Raavi stupid advice.

Rishita however informs Dhara that this time Shiva has gone too far so Raavi should teach Shiva a lesson.

Meanwhile, Shweta finds the period control pills and with an evil grin, she announces that Dhara will become the reason for Raavi and Shiva’s separation.

In the meantime, Shiva grabs Krish’s collar on the street but before he can start beating Krish like a raging bull Gautam and Dev split them up.

Gautam however yells at Shiva for letting his anger get the best of him but Shiva screams that he doubts Raavi because she does not tell Shiva everything.

Shiva even reminds Guatam about Dhara and his misunderstanding and adds that if Dhara can get insecure so he can also do the same thing.

After angry Shiva walks away, Dev tells Gautam that they need to step in between Shiva and Raavi’s relationship if they want to save it.

Later while Raavi is holding her head due to a headache, Shweta enters Raavi’s room and offers her medicine.

Shweta even apologizes to Raavi for not saving the shirt with fake tears and Raavi believes her.

Looking at Raavi taking the pill, Shweta smirks and walks away.

The next morning, while Raavi is packing her bag for Mumbai, Shiva arrives there and dumps all Raavi’s clothes in the suitcase.

He even orders Raavi to pack these clothes too so she does need to send Arnav for these making Raavi angry.

Raavi then yells at Shiva that this is her house and she will come back later.

Dhara who hears Raavi and Shiva’s conversation decides to interfere but Gautam stops her.

This makes Dhara angry and she starts arguing with Gautam.

On the other hand, while Shweta is looking through jars to find snacks to eat, Krish arrives there and they too get into argument.

Thinking Krish can help her to break the Pandya family better, she offers to befriend Krish in an emotional voice but Krish laughs out loud.

He then informs Shweta that he will not trust her again and walks away.

On the other hand, Raavi gets shocked to see Arnav wearing the same shirt she gifted to Shiva.

While recalling Shweta’s behavior, Raavi figures out Shiva must have seen the price tags and that’s why he was angry.

© Copyright tellybest.com, 2022, 2023. All Rights Reserved. Unauthorized use and/or duplication of any material from tellybest.com without written permission is strictly prohibited.
Cached Saved on: Monday 21st of November 2022 03:26:31 PMCached Disp on: Sunday 4th of December 2022 11:31:03 PM