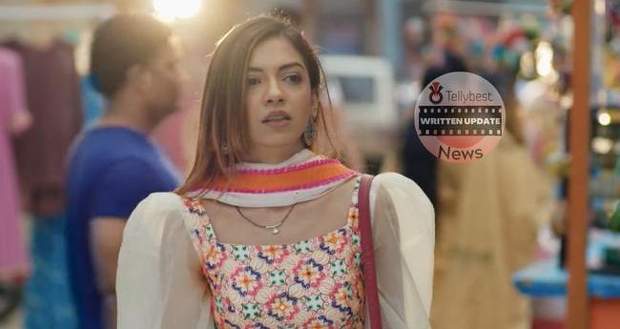 Today's Pandya Store 8th October 2022 episode starts with the Pandya family riding in the bus towards the resort.

Dev tries to make the trip memorable by having all the family members sing and play Antakshari.

The family reaches the resort and is happily welcomed by the staff as they enter the reception hall.

Just then, Deven comes there in the guise of a waiter while Swetha worries that no one should recognize her.

Suman stops Deven and asks him if they have met before to which Deven lies and saves himself.

Further, Suman goes towards the sweets shop and buys pastries while the staff takes the luggage along with the bag containing the jewelry.

Swetha thinks up a plan and leaves to go to Suman's room and gives Chiku to Krish.

Further, the family enjoys the scenery of the resort while Swetha enters Suman's room and exchanges the jewelry with the fake ones.

However, she hears Krish and Suman coming and packs the bags looking as if she came to the room mistakenly.

Swetha gives some jewelry to Suman saying that she'll get them from her later.

Later, Deven stops Swetha midway and demands the jewelry from her while she says that she'll give them to him later.

Afterward, the family is preparing for the Haldi and Swetha is busy preparing the song list.

At the same time, Rishita gets her hand on Swetha's phone and connects the dots after seeing the pictures and recalling seeing her in Dhara's room.

Rishita transfers the photos to her phone and smirks as Swetha sees her and takes the phone from her angrily.

Seeing Rishita's determined look as she is leaving, Dhara goes after her and stops her from talking to Suman by lying that her lehenga is destroyed.

On the other hand, Deven corners Swetha and is threatening her while Krish shouts her name seeing the servant cornering her.

© Copyright tellybest.com, 2022, 2023. All Rights Reserved. Unauthorized use and/or duplication of any material from tellybest.com without written permission is strictly prohibited.
Cached Saved on: Monday 21st of November 2022 08:31:05 PMCached Disp on: Tuesday 6th of December 2022 12:06:33 PM