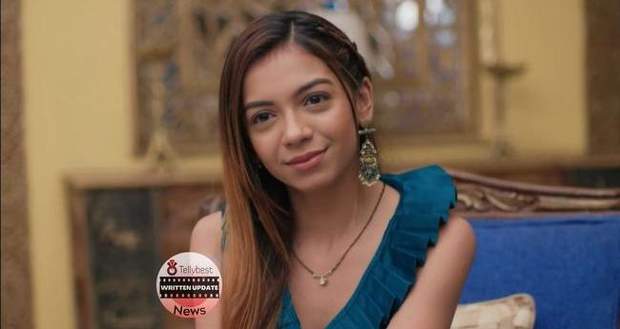 However, Dhara being firm-minded, tells Swetha that she just has to focus on taking care of Chiku as she will be leaving soon in some time.

Swetha tries to manipulate Dhara saying that she must also be attached to Chiku.

Dhara holds back her tears and smiles as she says that she has willed her heart as she knows that Chiku is Swetha's son.

Elsewhere, Shiva, Krish, and Raavi are at Krish's friend, Subhesh's workplace where his boss, Arnav greets them.

Shiva and Raavi go ahead to talk while Arnav says that it's very easy and reveals that he is a big fan of Raavi.

Raavi holds Arnav's hand and thanks him while Shiva sees it and gets jealous.

At the same time, Rishita takes counseling from Dr. Joshi who advises her to install CCTV cameras in her house so that her worry for her child lessens.

Back at Subhesh's office, Arnav manages to find the IP address of the hacker and Raavi asks him if he can teach her so that she can help other girls and he agrees.

Rishita returns home and tells the family that her session with Dr. Joshi was very nice and that she suggested getting the CCTV cameras so that she doesn't worry about Chutki.

Raavi tells Shiva to go to work and Krish to go to college while she stays back.

At the Pandya house, Swetha argues that she won't allow a camera in her room while Suman says that she will decide as she is the owner of the house.

After some days, Suman gets excited about her birthday the next day while Dhara acts as if she doesn't remember.

Meanwhile, Swetha feels annoyed as she is under the surveillance of a CCTV camera and tells her friend on the call to help her get out of there.

In the kitchen, Dhara cries as she circles the date Swetha and Chiku will leave.

Krish sees Dhara crying and hugs her to comfort her while telling her that he loves her.

Suman sees Raavi climbing the backyard from the CCTV and gets angry while Rishita worries for Raavi.