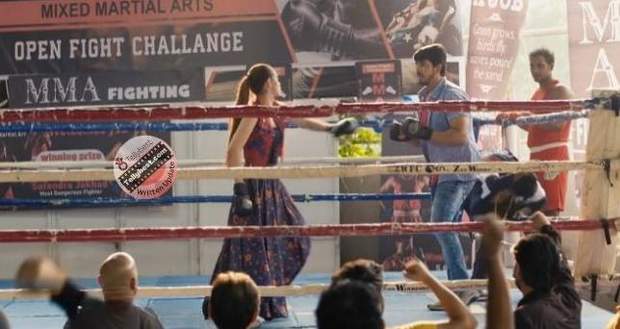 Today's Pandya Store 9th December 2022 episode starts with the Pandya brothers leaving for work and seeing that Shweta is begging right in front of their house.

Seeing Chiku like that Dhara’s heart aches, and Gautam tells Shweta that she is not suitable for begging.

Krish butts in and taunts Shweta that she got herself in this hellhole herself and that if she wants to beg she should go to her father’s house.

Shiva shuts out all the people and then gives some money to Shweta, and tells her to leave or it won’t be good for her.

Seeing Chiku cry like that Dhara thinks of giving Shweta the tiffin she made for Gautam. Dhara sends the Pandya brothers to their store and offers the tiffin to Shweta.

Shweta pushes away Dhara continuously and finally says that Dhara might have poisoned the food to kill her and continues to beg in that locality.

On the other hand, Arnav tells Raavi that her anger has taken over her mind and that’s why she needs a break from the office.

He further says that this is what everyone wants including Dhara.

Hearing Dhara’s name Raavi gets more enraged and says that he should take her side instead of Dhara’s.

Then, Arnaav tells her to sort things at home and that if she can prove that she will hate Shiva then he will side with her but he also knows that this won’t happen.

Raavi confronts him and tells him that she loves Shiva but she can’t forget what he did to her.

Hearing this Arnav butts in and just orders her demission, and tells her to clear out her payment.

Meanwhile, at the Pandya house, Dhara angrily fills milk in 10 different bottles and says that she will give this to everyone in the colony to give to Shweta.

Walking by, Rishita sees angry Dhara and asks her if she is well or not as she looks angry while Dhara tells her about the drama Shweta did this morning.

Rishita explains to Dhara that for Shweta Chiku is a golden egg and she won’t let anything happen to him.

On the other hand, Raavi decides to confront Shiva and finds him in a boxing club.

In the boxing club, Raavi punches Shiva as he tries to touch her she further gives money to fight him.

Raavi tells him that she won’t leave and all the talk that has to be done will be in this boxing ring itself only.

Later, Raavi participates with all her willingness but Shiva doesn’t, Raavi forcefully feeds him a sweet and tells him that this is for losing her job.

Meanwhile, the colony aunties ask Dhara to leave without taking the milk bottles.

© Copyright tellybest.com, 2022, 2023. All Rights Reserved. Unauthorized use and/or duplication of any material from tellybest.com without written permission is strictly prohibited.
Cached Saved on: Thursday 26th of January 2023 05:38:39 PMCached Disp on: Monday 6th of February 2023 02:34:53 AM