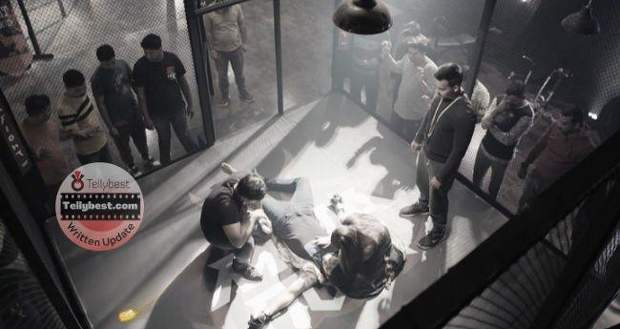 Today's Pandya Store 9th January 2023 episode starts with Shiva getting unconscious after getting beaten brutally by his opponent.

Raavi runs into the ring and calls his name and begs him to wake up.

Shiva opens his eyes and looks at Raavi and assures her that he is alright.

He orders her to take the prize money to the hospital for Chutki’s treatment rather than him.

Raavi stubbornly takes Shiva to the hospital and the Pandya family gets shocked to see him injured.

Even though he was so injured he asks for Chutki and gives the money to Rishita.

Dhara doesn’t give any excuse and lets Raavi take everything out on her.

Raavi tells everyone how lonely she felt when she saw Shiva covered in blood.

Dhara reasons with Raavi that she was worried about Chutki and tries to console Raavi that Shiva will be alright.

However, she walks to Rishita and hugs her tightly while Dhara’s arms hang in the air.

Later, the doctor informs everyone that Chutki is alright and Rishita hugs Dev out of relief.

Shiva’s doctor informs the family that he has suffered an internal head injury and surgery will cost at least 7-8 lakhs.

Meanwhile, Shiva refuses to get treated and Raavi goes to him to make him agree to surgery.

Suddenly Raavi screams Shiva’s name and everyone runs to his room.

The room is devoid of Shiva’s presence and everyone figures that he has fled the hospital room.

In the house, Raavi runs into the room worried and Suman pushes Raavi aside and asks Shiva to go back to the hospital.

Shiva expresses his concern about the 8 lakh fees and Raavi exclaims that they will keep the Pandya house on mortgage.

However, Krish chuckles and Raavi blames him for marrying Shweta which resulted in their situation.

Krish blames Raavi for being a flipper as no one let Dhara sell the house previously but when they need the money they are ready in a blink.

Dhara asks Krish to not defend her and mind his language as he is the youngest in the house.

She defends Raavi and tells Shiva that she loves him the most even more than the house.

Dhara urges everyone to give her a try to her plan before mortgaging the house and everyone agrees.

She announces the start of the operation "taking back the Pandya store".

The next morning, Krish informs people that they are planning to sell the Pandya house.

At the same time, Krish finds out that Mansukh Bhai is buying their Pandya store so he runs to the house to tell Dhara and Gautam.

© Copyright tellybest.com, 2022, 2023. All Rights Reserved. Unauthorized use and/or duplication of any material from tellybest.com without written permission is strictly prohibited.
Cached Saved on: Wednesday 25th of January 2023 12:04:53 PMCached Disp on: Wednesday 1st of February 2023 10:06:49 PM