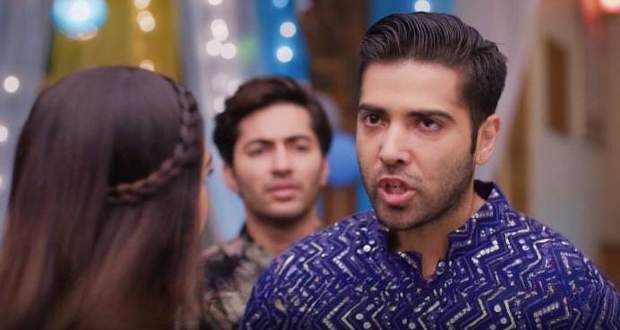 Today's Pandya Store 9th July 2022 episode starts with Prafulla overhearing Rishita's conversation with the Pandyas thinking that she should call Kamini and get the Pandyas caught red-handed.

Accidentally, Prafulla drops down her phone which alerts the Pandyas and Raavi follows Prafulla.

Raavi and Dhara drag Prafulla into their house while Prafulla opposes them.

Later, Suman orders Rishita to tie Prafulla and keep her in the Pandya house till they fulfill their plan.

Further, Shiva, Gombie, Dhara, and Raavi get ready in style and leave the house with a bunch of bags in a pickup truck towards Jeewan Lal's land.

Shiva hides and hears Jeewanlal's conversation and walks towards Suman who looks scary dressed up as a hospital patient.

Further, Gombie is dressed up as a ward boy while Dhara is dressed as a corpse bride and Raavi as Manjulika.

On the other hand, Jeewanlal enjoys his party with the music on.

As Jeewanlal and his friends are enjoying the party one of his friends notices Suman and Gombie and screams 'ghost' in fear.

Jeewanlal refuses to believe his friends as Gombie and Suman hide away and call his friends coward.

At Pandya house, Prafulla is tied up while Kamini calls her and is worried about Prafulla.

Further at Jeewanlal's godown, Shiva writes a message in red colored ink ordering Jeewanlal to leave the Pandya family's land which scares the worker and Jeewanlal.

Gombie breaks the mirror nearby which scares Jeewanlal and he runs away.

Meanwhile, Suman frees herself and informs Kamini about the plan of the Pandyas.

Jeewanlal looks for the incensation while Dhara scares him as a corpse bride asking him to return Shiva's land.

As Jeewanlal lights up the incense Shiva turns on the fan which diverts the fumes towards him and Shiva arrives in front of Jeewanlal threatening him to give his land back.

Jeewanlal tries to call the police but Raavi, Dhara and Shiva circle around Jeewanlal to scare him some more.

© Copyright tellybest.com, 2022, 2023. All Rights Reserved. Unauthorized use and/or duplication of any material from tellybest.com without written permission is strictly prohibited.
Cached Saved on: Monday 21st of November 2022 07:52:51 PMCached Disp on: Saturday 3rd of December 2022 02:34:24 PM