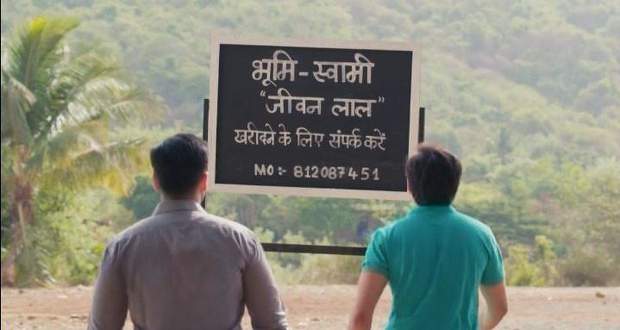 Today's Pandya Store 9th June 2022 episode starts with Gombie and Dev getting stopped by the thugs of Jeewanlal and get scared.

Further, the thugs asked who removed the board from the land while Gombie shows him the papers.

The thugs tear off the papers and throw them in the air making Gombie angry.

On the other hand, Rishita talks about renovating the house as they will be getting money by selling the land.

Further, Rishita talks about making a separate nursery for her child while Suman says that how can a small child go to nursery at a small age.

Funnily Rishita explains the meaning of nursery while Suman scares her as a cat will take her child if she kept her kid away for a long time.

Meanwhile, Gombie and Dev face the thugs by fighting but get beaten up instead.

Further, Raavi talks to Prafulla about how everything is going well and will renovate Pandya Store by selling the land.

Rishita plans on baking a cake for Shiva while Suman plans on giving Shiva's childhood photograph as a birthday gift.

Meanwhile, Shiva works hard and gets five thousand rupees as his payment.

Later Dhara buys a shirt for Shiva and packs it for his birthday.

On the other hand, Shiva stands outside the apparel shop while Krish bugs Shiva to buy him one shirt.

Further, Shiva thinks of buying a dress for Raavi.

Suman refuses to invite Prafulla but agrees after Raavi insists.

Meanwhile, Gombie and Dev decide not to tell anyone about the land while Suman notices bruises on Gombie's face.