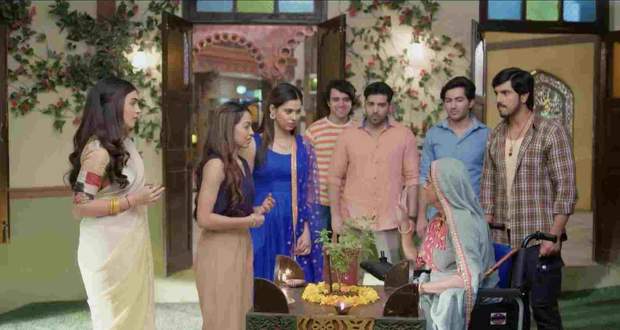 Today's Pandya Store 9th March 2022 episode starts with Shiva seeing Raavi with the guy whom Prafulla and Suman have set up as a probable groom for her.

Unaware of Suman and Prafulla’s plan Raavi takes the help of the same guy for selecting sherwani for Shiva.

The guy likes Raavi and calls Prafulla to inform her the same while Shiva gets jealous of him.

Prafulla and Suman get joyous upon hearing the news.

Meanwhile, Raavi shows her purchases to Dhara which included the bride-groom dresses.

At the same time, Rishita returns from Ahmedabad, showing her indignation for being excluded from such an adventurous plan.

Prafulla doesn’t support Suman’s plan, however, Suman gets her way in the conversation.

Further on, Shiva senses something being fishy when he enters his room and sees Raavi behaving oddly.

Searching the room, Shiva gets his hands on the shopping bags that Raavi had hidden above the almirah.

Shiva assumes that Raavi is planning to get married to the same guy he had seen her with while shopping.

At the same time, Suman calls Shiva into her room.

Whispering, Suman asks Shiva to kidnap Raavi as Prafulla and she plans to get her married to some NRI guy.

Shiva again gets annoyed hearing Raavi being with someone else and tells Suman that Raavi probably knows about the plan as he had seen her shop for the wedding clothes.

Suman confidently says that Raavi possibly can’t know about it and suggests Shiva elope with Raavi to get her kidnapped.

Shiva denies getting involved in Suman’s plan, after which Suman tries blackmailing him emotionally which doesn’t work for him.

On the other hand, in Dhara’s room, everybody is packing to leave for the destination of the wedding.

Gautam brings out his bottle of alcohol when Rishita asks how to get Shiva kidnapped.

At the same time, Shiva arrives there to talk to Dhara and Gautam.