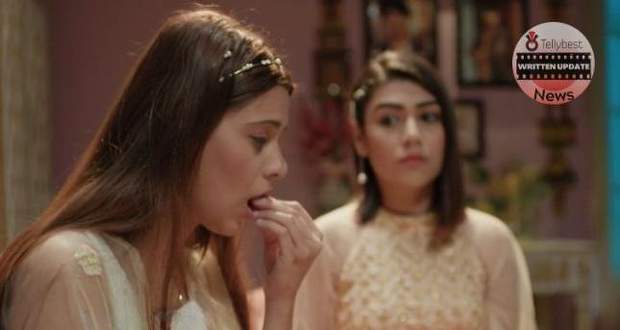 Today's Pandya Store 9th November 2022 episode starts with Raavi realizing that the shirt worn by Arnav is the one she bought for Shiva.

Raavi blames her stupid self as she thinks Shiva might have exchanged it for a cheaper one.

Noticing Raavi's deadbeat face, Arnav promises to make things alright between her & Shiva as he rubs her hands in her lap.

Swetha eyes Halwa greedily, thinking when she was living with her parents she used to eat it every day.

After Dhara takes some of the Halwa to feed Chiku, she asks Swetha to pour the remaining Halwa for Chutki.

Rishita plays with Chutki in the room as she waits for Dhara to bring the sweets for her.

However, she is not able to stop her hunger & finishes the halwa in one go.

Thinking that Rishita will kill her if she gets to know this, Swetha plans to bring one cat inside the house & pretend as if it ate everything.

Outside the house, Suman is going to the temple with Kanta when she sees Swetha hopping on the road.

She hides her face and orders Kanta to book a rickshaw so she doesn't see Swetha's crazy antics.

Swetha finally can get a hold of the cat and brings it inside the kitchen and then shooing it away.

An impatient Rishita then goes to bring the halwa for Chutki herself when she sees the pan all empty.

She raises her finger at Swetha if she is the one who ate it all up.

Dhara comes and asks Rishita to stop her blaming game when she says Chiku always gets the better things as compared to Chutki.

However, Krish enters the kitchen and tells Dhara that Rishita is not wrong since he saw Swetha eating the halwa.

Swetha gets defensive while they all start fighting.

Dhara orders Krish to go and get more dry fruits and gives the left over halwa not eaten by Chiku to Rishita to be fed to Chutki.

Before another fight starts, Dhara instructs all of them to leave the kitchen.

In the night, Gomby & Dhara discuss the deterioration of Shiva & Raavi's relationship.

Meanwhile, Shiva is seen seeing the video of Raavi where she is telling her viewers that she's excited about her first plane ride.

Both of them miss each other but choose to remain in the angst.

On the other hand, Swetha decorates Krish's whole room and drops a heart-shaped card where "can we be friends?" is written.

Krish instantly remembers their wedding night when Swetha jerked his hand away, stating she wouldn't have married him if it wasn't for Chiku.

Krish tears the card and leaves Swetha all alone in the room.

Later, Rishita pretends not to hear Dhara in the hall where they are drying chillies and Rishita says she is being very partial toward Swetha.

Just then, Raavi enters the house with her luggage and experiences a headache.

Raavi falls abruptly on the floor while Rishita & Dhara goes in shock.

© Copyright tellybest.com, 2022, 2023. All Rights Reserved. Unauthorized use and/or duplication of any material from tellybest.com without written permission is strictly prohibited.
Cached Saved on: Monday 21st of November 2022 07:06:57 AMCached Disp on: Thursday 1st of December 2022 12:06:27 PM