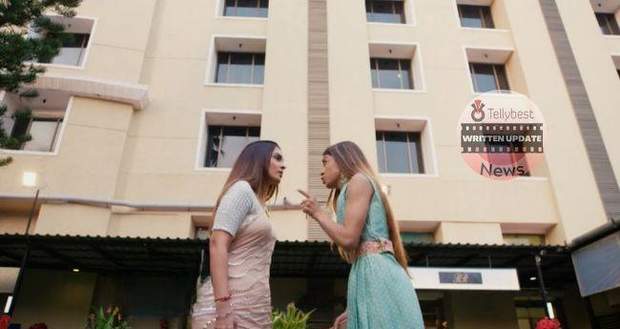 Swetha looks uncomfortable while Deven praises her bravery and tells her that she needs to give him the jewelry before marriage only.

Swetha agrees and thinks to give him the jewelry as soon as possible before he can find out that the whole property is under Chiku's name.

On the other hand, Rishita informs Dhara that Swetha has gotten imitation jewelry made of the jewelry that Dhara bought.

Dhara gets shocked as she recalls her cupboard being scoured by someone.

Meanwhile, Krish shouts for Swetha seeing her and the waiter together while walking towards them.

Deven leaves there while Swetha lies to Krish that she had something to tell the servant that she can't tell others.

Krish gets confused and asks Swetha to tell him what is it while Swetha acts nice to him and tells him to not worry.

At the same time, Rishita gets happy that someone finally believes her but gets upset while Dhara tells her that they need to see the two sets of jewelry to confirm that Swetha is cheating.

Elsewhere, Shiva goes to the tea stall thinking to have a cup of tea while he waits for Raavi.

However, Raavi comes there just then and thinks that Shiva has left for the resort and didn't wait for her.

Arnav convinces her to take his car and goes back home in an auto-rickshaw.

Meanwhile, Swetha feels frustrated as she sees the fake jewelry in her bag while Dhara and Rishita check if the jewelry is real or not in Suman's cupboard.

Dhara says that she wonders why Swetha didn't steal the jewelry as she had many chances to do so which angers Rishita.

They both argue and Rishita leaves the room while Dhara goes after her intending to apologize.

On the other hand, the Pandya brothers are discussing going on a honeymoon too when Shiva comes there.

Dev asks him about Raavi which makes Shiva pale in fear.

Elsewhere, Rishita bumps into Swetha who is holding the pink duffel bag with the fake jewelry inside it.

Dhara comes there too and returns the phone to Rishita while Swetha lies that she just wanted to get the jewelry she gave to Suman earlier.

Dhara goes to get her jewelry while Rishita taunts Swetha saying that imitation jewelry does not have the hallmark on them.

Swetha thinks that both Dhara and Rishita have gotten suspicious of her and decides to steal the jewelry faster.

© Copyright tellybest.com, 2022, 2023. All Rights Reserved. Unauthorized use and/or duplication of any material from tellybest.com without written permission is strictly prohibited.
Cached Saved on: Monday 21st of November 2022 06:48:52 AMCached Disp on: Thursday 1st of December 2022 01:49:19 AM