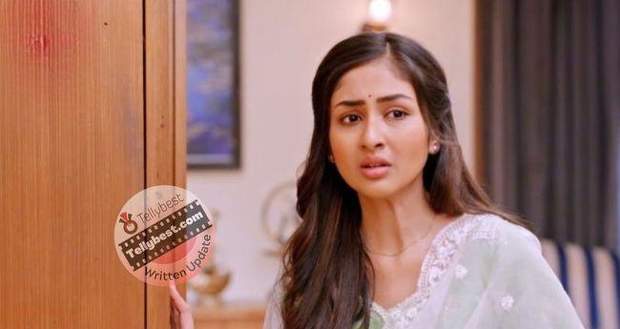 Hearing this, Sanju rolls Neeti over and informs Neeti lovingly that she should stay in his arms to avoid the cold.

Neeti however pushes Rajeev by tickling him and Sanju starts running around to avoid Neeti.

Neeti then starts chasing him around the room causing Rajeev to fall to the ground but before Rajeev can catch Neeti, she locks herself in the washroom.

Afterwards, during breakfast, Biji scolds Chandrika for always cooking bread for breakfast and Chandrika just stand there in silence.

Biji then informs Pari that she will make a sweater for her and when Pari tries to deny it, Biji announces she is doing this out of love.

Neeti, sitting right beside Rajeev, questions Biji if she will make a sweater for her too, but Biji denies it by saying that it is already enough that they are keeping Neeti in the house as a guest.

Hearing this, Neeti gets upset, and when Pari looks at Biji with concerned eyes, Biji tells Neeti that she will make a sweater for her too.

Looking at Neeti’s sad face, Rajeev decides to cheer up her mood so he decides to rub her foot under the table but instead of Neeti, he ends up rubbing Monty’s foot.

Monty scoffs feeling Rajeev’s foot and looks at Rajeev sternly who thinks why Neeti’s foot is suddenly so rough.

However, when Rajeev lowers his eyes to check, he gets stunned to see his foot on Monty’s foot.

On one hand, Neeti bursts out laughing realizing this; on the other hand, Monty thinks Rajeev’s wishes are becoming much more colorful now.

Afterward in the room, Neeti again starts laughing seeing Rajeev in front of her, and informs him that she needs to buy winter clothes so she is going to the market.

Rajeev then urges Neeti to hug him, but Neeti walks away while murmuring she will give him the hug in the night.

Neeti who thinks Vishal is Rajeev tries to follow him but Vishal gets into a shop before she can reach him.

Neeti then calls Pari to inform her about Rajeev being in India and Pari gets stunned to hear this.

When Neeti tells Pari that she will talk to Rajeev aka Vishal, Pari orders her to forget it as she will know if Rajeev returns from London.

Neeti is adamant to find out if the person is Rajeev and Pari urges her to wait until she sends her the picture.

Cutting the call, Pari calls Rajeev to inform him about this whereas Neeti goes to talk to Vishal's driver but before the driver can tell her about Vishal, he gets interrupted every time.

Neeti then thinks Vishal aka Rajeev has trained his driver very well.

On the other hand, when Pari is going out of Bajwa's mansion, she meets Biji who orders her to take her outside so she can sit under the sun and Pari is not able to ignore her command.

© Copyright tellybest.com, 2022, 2023. All Rights Reserved. Unauthorized use and/or duplication of any material from tellybest.com without written permission is strictly prohibited.
Cached Saved on: Wednesday 25th of January 2023 01:17:16 PMCached Disp on: Tuesday 7th of February 2023 12:11:10 AM