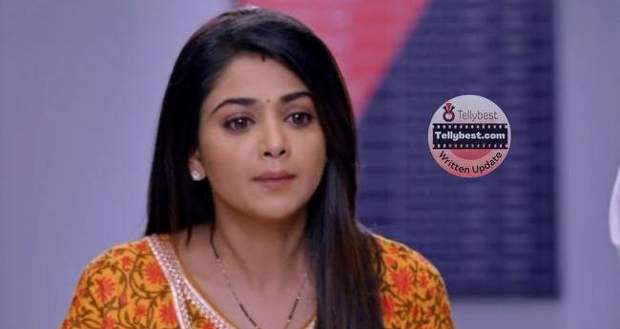 Dadi hugs Rajeev and Pari and says that she wishes that nothing of this sort happens to Pari again.

Babli asks Monty to come inside as he will not get any medal for his extraordinary bravery and makes fun of him by teasing him.

Monty gets offended by Babli’s words and asks Parminder and Dadi to defend him but they take Babli’s side.

Dadi takes Rajeev and Pari inside the house and makes Pari sit with her to check her condition.

Gurinder sulks at Rajeev as he did not listen to her and risked his life to save Pari while Rajeev tries his best to convince her.

As Gurinder goes inside without talking to Rajeev, Rajeev tells others that she is just angry as she is concerned for him.

Parminder asks Pari to go to her room and take a rest for now as she has gone through many difficult things for the entire night.

Everyone goes back to their rooms with Rajeev and Neeti coming to their bedroom.

Rajeev feels very tired while Neeti asks him to change his clothes as she needs to dress the wound on his leg.

Rajeev asks Neeti if he will receive love from her if he changes his clothes to which Neeti agrees so that Rajeev does his work.

After Rajeev comes out in shorts, Neeti puts medicine on Rajeev's wound and dresses it with care.

However, as Rajeev gets excited about some romance with Neeti, she goes to sleep saying that she and their baby are tired.

Rajeev gets upset seeing Neeti’s behavior and calls her a cheater who breaks his hopes every time.

Meanwhile, Pari thinks about Rajeev kissing her to give her mouth-to-mouth air and feels guilty as she should not have such thoughts about her best friend’s husband.

Pari decides that she will not think about Rajeev anymore as he does not love her.

At the same time, Neeti tells Rajeev that she trusts him and that no one will come in between them which reminds Rajeev about Pari and he retracts himself from Neeti.

Neeti gets surprised when she sees Rajeev going to sleep and finds his behavior odd.

Trying to irritate Rajeev, Neeti wakes him up and says that he does not show his love when it is needed.

Rajeev gently kisses Neeti on her neck and asks her to rethink her decision once more.

As Neeti refuses to do so, Rajeev starts tickling Neeti to make her laugh when Pari knocks on their door.

Neeti hides and asks Rajeev to check if it is Dadi but Rajeev discovers Pari outside their room.

Pari asks Rajeev if his wound is fine now while Neeti comes out and starts talking about Rajeev’s poor attempt at romance.

Neeti asks Pari to sleep between them so that Rajeev cannot irritate her but Pari refuses by making some excuse.

Rajeev asks Neeti why she would say something like that to Pari as she will feel bad thinking about Rajeev (the imaginary one).

Meanwhile, Pari cries in her room and asks herself why she is feeling bad after seeing Rajeev and Neeti together.