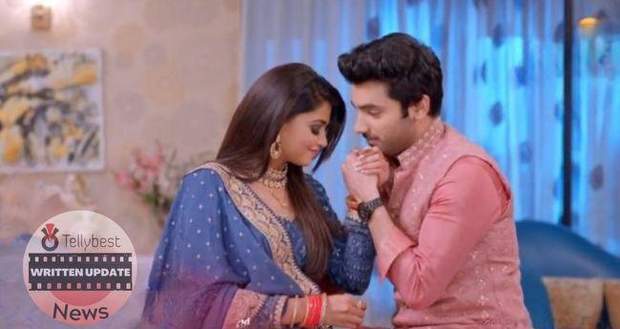 Today's Parineeti 10th November 2022 episode starts with Rajeev questioning Neeti why she is asking like this.

Rajeev even informs Neeti that he feels guilty.

Meanwhile, Biji starts looking around the room for Neeti while Monty assures her that Rajeev is loyal to Pari.

On the other hand, Rajeev tells Neeti that he is not entirely at fault here in a whisper.

With a smug look, Neeti informs Rajeev that his parents are also at fault and Rajeev should not have hidden the truth from her.

Neeti further scolds Rajeev for not telling her about Rajeev’s childhood name and Rajeev breaths a sigh of relief.

In the meantime, Parminder yells at Gurinder for not letting Pari reveal the truth to Biji but Gurinder announces that Neeti is Rajeev’s only wife.

Parminder and Gurinder then get into a heated argument about it and Biji arrives simultaneously.

Biji questions Gurinder and Parminder about why they were arguing.

Feeling relieved, Gurinder lies that they were arguing with each other about what to make for Biji’s dinner.

Biji even questions Gurinder about Neeti and to divert Biji’s mind, Gurinder reminds her about lighting an earthen lamp on the terrace.

Biji thanks Gurinder for reminding her about it while Parminder rolls her eyes.

After Biji and Parminder leave, Gurinder excitedly announces that as soon as Neeti gets the property she will teach everyone a lesson.

Later, on the terrace, Rajeev hugs Neeti from behind and apologizes to Neeti for behaving rudely with her.

Neeti however remarks that she does not understand Rajeev’s mood while Rajeev rubs his thumb around Neeti’s cheek.

Biji also enters the terrace at the same time and notices Rajeev standing there.

Pari arrives there just then and is shocked to see Biji walking toward Neeti and Rajeev.

On one hand, Pari is coming forward to warn Rajeev; on the other hand, Biji is also walking in the same direction.

However, Neeti walks away abruptly, and Biji witnesses Pari and Rajeev together.

Biji teasingly urges Pari and Rajeev to hug each other while Pari feels weird.

Seeing Pari and Rajeev hugging each other awkwardly, Biji announces that if her husband was alive, she would have taught them how to hug lovingly.

While Biji is scolding Pari and Rajeev for not giving her a grandchild, Neeti arrives at the entrance but Neeti thinks that this is not a good time to meet Biji and walks away.

Meanwhile, Babli, Pari’s sister enters Bajwa’s house and everyone gets shocked to see her.

Later while Neeti and Rajeev are romancing each other, Babli thinks Neeti is betraying Pari by having an illicit relationship with Rajeev.

Afterward, Babli confronts Neeti on the terrace about it but Neeti is not able to hear anything due to the firecracker sound.

Pari also arrives there at the same time and takes Babli away.