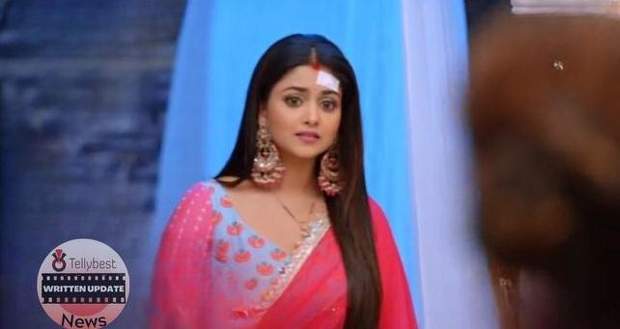 In the hallway, he collides with Parminder who looks at him angrily.

Seeing Parminder, Rajeev tries to talk to her but Parminder yells that Rajeev does not love Neeti the way Pari loves him.

Further, Parminder adds that she will never accept Neeti as her daughter-in-law much to Rajeev’s shock.

On the other hand, Neeti decides to go to the kitchen to look for Rajeev.

While Parminder and Rajeev are busy discussing, Neeti approaches them and questions Parminder about what she is talking about.

Noticing Neeti, Rajeev quickly announces that Parminder was just trying to tell him about tomorrow’s rituals.

Hearing this, Neeti informs Parminder that she will not disappoint her but Parminder just walks away without looking at Neeti.

After Parminder walks away, Neeti asks Rajeev if Parminder hates her, and Rajeev consoles her by saying Parminder is just having mood swings.

Meanwhile, in the room, thinking about her first-night memory with Rajeev, Pari’s eyes get filled with tears and she starts packing her clothes.

However, remembering Neeti’s situation, Pari decides to stay even though now Neeti is Rajeev’s life.

Th next morning, Rajeev tries to keep Neeti in bed so he can cuddle with her but Neeti reminds him that today she has to cook breakfast for everyone to avoid Parminder’s glare.

When Rajeev still does not let her go, Neeti asks Rajeev if he wants a surprise in a seductive voice, and excitedly Rajeev nods.

However, Neeti throws a pillow at him and runs away.

On the other hand, Parminder tells her husband in a sad voice that she cannot imagine what Pari is going through right now.

Further, she tells him that she thinks the family is also at fault like Rajeev because they never questioned Pari if she is okay with Rajeev or not.

Hearing this, Tayaji calms Parminder down by announcing that they trusted Rajeev, so even if Pari told them, they would not have understood her.

At the same time, Chandrika enters their room and urges Parminder to come for breakfast as it is Neeti's first cooking.

Later in the kitchen, Neeti tells Pari in a panicked voice that she cannot cook "Gajar ka Halwa".

While passing by Rajeev overhears it and urges Pari to help.

Pari tries to deny it but looking at Neeti's puppy eyes she agrees.

Meanwhile, at the breakfast table, Gurinder and Parminder get into a heated argument about Pari and Neeti.

© Copyright tellybest.com, 2022, 2023. All Rights Reserved. Unauthorized use and/or duplication of any material from tellybest.com without written permission is strictly prohibited.
Cached Saved on: Monday 21st of November 2022 03:14:05 AMCached Disp on: Friday 9th of December 2022 04:27:28 AM