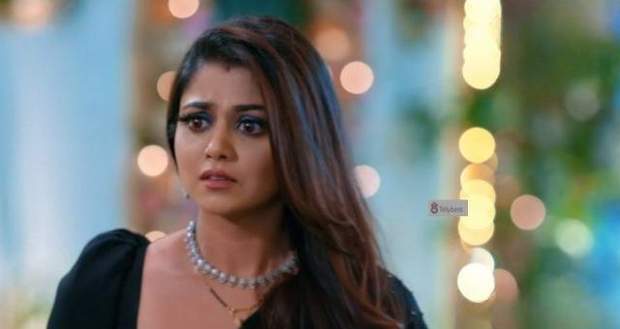 Seeing Rajeev, Pari gets startled and asks him why he is here.

Hearing this, Rajeev replies that he has come early as his meeting has ended early.

This makes Pari blush and she starts thinking that Rajeev cares for her.

Afterward, Rajeev goes to the washroom to get fresh.

In the washroom, Rajeev starts thinking that he lies in perfection.

After Pari falls asleep, Rajeev gets a call from Neeti who asks him to propose to her.

However, Rajeev gets hesitant as he doesn’t want Pari to hear.

He tries to avoid the confession but Neeti is persistent.

Hearing the murmuring, Pari wakes up but pretends to sleep.

Rajeev then goes out of the room and confesses his love to Neeti.

Feeling unsatisfied, Neeti asks him to take her name too but Rajeev snaps.

When Rajeev returns to his room again, Pari inquires him about the call.

Rajeev quickly lies that he was getting scolded by his boss on call.

At the same time, Pari also gets a call from Neeti who informs her about Sanju’s strange behavior.

During the call, Pari inquires Neeti about Sanju.

However, Neeti informs Pari that she doubts Sanju is sleeping with his mistress.

Hearing this, Pari tells Neeti that she will visit Neeti’s house now to confirm whether Sanju is sleeping with someone or not.

However, when Pari arrives at Neeti’s home, she finds Sanju sleeping peacefully in bed.

Seeing him, Pari breathes a shy of relief and informs Neeti about it.

A flashback shows how Rajeev overheard Pari's conversation and got there quickly.

When she returns home, she finds Rajeev’s bed empty.

However, she calms down when she finds Rajeev in the kitchen.

To make Pari forget about the doubt, Rajeev surprises her with cake to celebrate their monthly anniversary.

Rajeev’s gesture melts Pari’s heart and she thanks God for giving her a husband like him.

The next morning, Neeti and Sanju both get into a fight about Neeti’s suspicion.

As per Sanju, Neeti only trusts Pari’s advice and it will break their marriage.

Realizing her mistake, Neeti apologizes to Sanju and he forgives her.