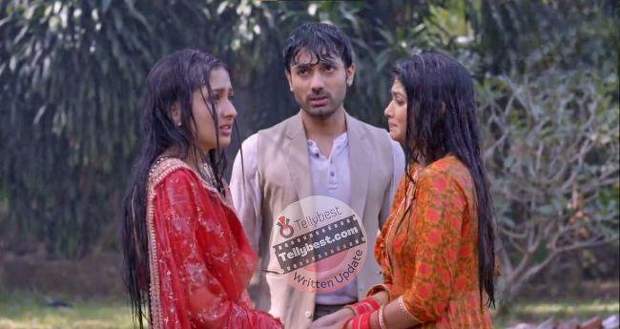 Today's Parineeti 11th January 2023 episode starts with Neeti Pari crying in her room while Parminder comes to check on her and notices her tears.

As Parminder asks Pari what the matter is, Pari opens her heart in front of Parminder and tells her that she cannot withstand Rajeev with someone else.

Pari says that it is very hard for her to see Rajeev being lovey-dovey with none other than her best friend.

Even though she can give her life away for Neeti, Pari refuses to share the person she loves the most with her best friend.

Parminder hugs Neeti and asks her to be strong but Pari makes up her mind to leave that house as it is not possible for her to live there anymore.

Pari tells Parminder that fate does not favor her at all in the current situation and she can never stop herself from loving Rajeev.

Without giving out false hope, Parminder just hugs Pari silently as she cries on her shoulders.

Meanwhile, Neeti gets ready to go shopping so that she buys gifts for the family members when Rajeev wakes up from his sleep.

Neeti tells Rajeev that she wants to buy some gifts for the family members as it is Christmas.

As Rajeev dismisses Neeti’s idea by saying that there is no small child in their house, Neeti calls him a child and teases him.

Rajeev asks for a kiss from Neeti but she leaves without granting him his wish.

Gurinder asks Simmy for some advice on how she can throw out Pari from that house to which Simmy suggests she should instigate Neeti against Pari.

After Neeti reaches the market, she gets confused about what she should buy for each family member and calls Rajeev for help.

While talking to Rajeev (the real one), Neeti spots the fake Rajeev in the market but decides not to tell Rajeev on the call as he will get angry.

However, Neeti loses Rajeev in the crowd while talking to Sanju and searches for him when she notices people standing around an accident scene.

Neeti spots Rajeev lying on the ground with his head injured and decides that she will take him to her home so that she can discuss things about Pari.

Meanwhile, all the family members leave for a neighborhood function but leave Dadi behind due to her knee pain.

Dadi taunts Gurinder as her evil daughter-in-law but acts oblivious as soon as she comes in front of her.

On the other hand, Neeti tells everyone that the injured man is her brother-in-law and takes him with her.

Neeti tells an unconscious Rajeev that she needs to sort out many things with him as Pari is a diamond that no one can reject.