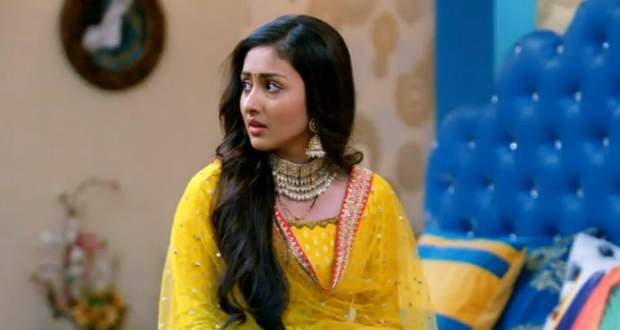 Today's Parineeti 11th May 2022 episode starts with Parineet crying and confessing her feelings for Rajeev while Rajeev is surprised to see the level of care and affection in her heart.

Further, Rajeev tries to calm Pari down and promises Pari to never get angry on a silly topic.

He continuously thinks of expressing his anger toward Parineet and telling her the truth but gets scared after realizing its consequences.

Meanwhile, the next morning Rajeev daydreams about Pari committing suicide due to his rude behavior but accidentally holds Pari in his arms.

Further, Chandrika arrives in the room and blushes to see the romance between the two.

Later, Parineet receives a sweet surprise as her mother Gurpreet arrives at Bajwa's house with Vikram.

Meanwhile, Parminder arrives and attends to Gurpreet and Vikram with regard.

Parminder has a little chat with Gurpreet and Vikram reflecting a good etiquette of respect for Parineet's family.

Later, Neeti calls Rajeev while she talks about his awkward behavior of running away from the party.

Neeti expresses her wish to meet Rajeev's family and taunts him that Sanju has changed.

Later, Parineet calls Neeti and she hangs up on Rajeev's call making him feel jealous.

Rajeev smiles while he looks at his phone and talks to Monty about how Neeti is so different from Pari.

Monty sows the seed of mistrust for Neeti in Rajeev's mind.

Further, Pari befriends Chandrika while Chandrika feels grateful for having a friend like Pari.

Parineet calls Neeti and invites her over to Bajwa house and promises to send her the address through Rajeev.