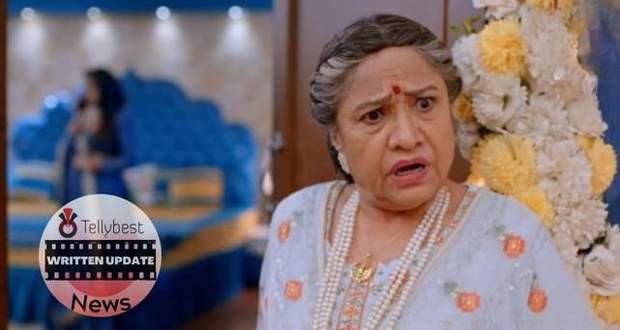 Rajeev arrives there at the same time and saves Pari while Babli spies on them from a distance.

On one hand, Pari thanks Rajeev for saving her life like a stranger; on the other hand, Babli thinks Rajeev only loves Pari and Neeti is coming between them.

Meanwhile, Babli collides with Monty on her way who questions her if she is okay.

Irritated Babli orders, Monty, to walk away as she needs to talk to Pari and calls Monty a creep.

After Babli walks away, Monty starts dwelling on Babli’s words and informs Rajeev that Babli knows the truth so he needs to stop her.

Babli even suggests Pari throw Neeti out of the house and Pari explains about Neeti’s marriage with Rajeev in between sobs.

After Pari explains everything, Babli looks at Pari with sympathy in her eyes and reminds her that Gurpreet and Babli are always here for Pari.

Pari however hugs Babli and urges her to stay silent.

On the other hand, Parminder reminds Gurinder that Neeti will leave Rajeev if she learns he is married to Pari too.

With a scoff, Gurinder replies that Neeti will forget about Pari as soon as she gives birth to a baby.

Biji enters the room at the same time and questions who is pregnant and Gurinder lies that Rajeev will soon become a father.

Biji gets excited as she thinks Pari is the pregnant lady and Neeti arrives there too.

Looking at Neeti, Biji questions Neeti about her husband in a sarcastic tone, and Neeti replies that he is busy somewhere.

Biji then orders Neeti to bring her husband so Biji can meet and Neeti nods.

Later, Neeti finds Rajeev stressed and orders him to come with her so she can show him something and Rajeev goes unwillingly.

In the meantime, Babli collides with Simmy in the hall and they get into an argument about it.

Monty arrives there at the same time and separates them both.

On the other hand. Rajeev gets stunned seeing Neeti dragging him to meet Biji and thinks his truth will come out soon.

However, a servant breaks a tray near Biji which distracts Biji and Rajeev runs away from there.

Afterward, Biji orders Neeti to show her husband but Neeti gets shocked to see Rajeev not behind her.

Biji however orders Neeti to bring Pari and Rajeev so she can give them blessings.

Later, Neeti meets Pari in the hallway and tells her even Biji has met Rajeev but not her.

Pari however lies that Biji has just seen Rajeev's picture in her phone only.