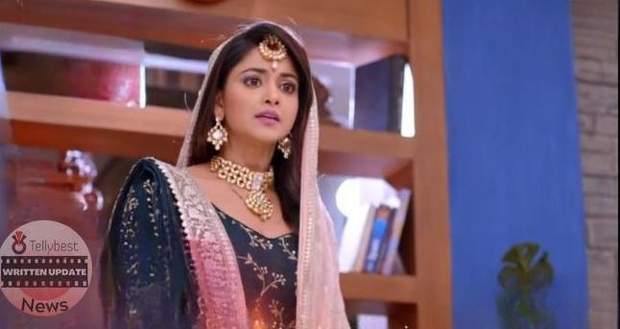 Today's Parineeti 11th October 2022 episode starts with Gurinder telling Parminder that she will indeed do a grand celebration for Neeti as Neeti is pregnant.

At the same time, Neeti arrives there to serve “Gazar Ka Halwa” to everyone, and Gurinder along with Simmy praises her for the food.

However, when Neeti goes to serve Praminder, she declines and walks away abruptly.

Neeti feels confused about Parminder’s behavior and thinks maybe Parminder is angry with her for some reason.

Rajeev then tells everyone that he loves cold halwa and excited Neeti yells he and Sanju have perfect choices that’s why they are made for each other.

Hearing this, Pari’s face falls and she walks away while Neeti thinks she will teach Rajeev a lesson for breaking Pari’s heart.

Later, Rajeev puts a dupatta on Neeti’s head with love in his eyes while Pari looks at them with longing eyes.

Pari feels frustrated when Neeti urges her to take selfies with her and Sanju but obeys Neeti as she does not want to upset her.

Pari then tries to excuse herself, but Neeti orders her to take romantic photos of Neeti and Sanju.

Pari’s phone even falls from her hand when she notices Neeti kissing Sanju and runs away from there.

On one hand, Rajeev is busy clicking pictures with Neeti; on the other hand, Pari feels worse, and tears stream down her cheeks.

Chandrika confronts Pari in the evening and orders her to stop pretending the fake smile.

Chandrika further adds that Pari has thrown away everything for Neeti for her happiness but now she should not pretend to be happy for Neeti.

Pari hears the bells sound and excuses herself to open the door to avoid Chandrika’s logic.

While welcoming all the guests, Pari gets shocked to see the same aunty who attended her “Muh Dikhayi”.

The aunt does not notice while entering as Pari is hiding behind the door.

Later while during the chitchatting, an aunty narrates the story of her friend’s son having a mistress after marriage.

Parminder feels scared as she thinks if they learned about Rajeev’s second marriage.

On the other hand, Pari worriedly informs Chandrika about that auntie’s arrival, and Chandrika consoles her saying they will figure it out soon.

Pari later goes to Neeti's room and gives her a tight hug to calm her down and tells Neeti she can deal with anything.

Pari's words motivate Neeti and she announces she can deal with anything with Pari by her side.

Entering the room Simmy urges Neeti to go with her for the ritual and Pari lies that she needs to call her mom.

Meanwhile, Tayaji makes Parminder understand that she needs to attend the ceremony for their family's reputation.

© Copyright tellybest.com, 2022, 2023. All Rights Reserved. Unauthorized use and/or duplication of any material from tellybest.com without written permission is strictly prohibited.
Cached Saved on: Monday 21st of November 2022 09:24:23 PMCached Disp on: Saturday 10th of December 2022 03:35:59 PM