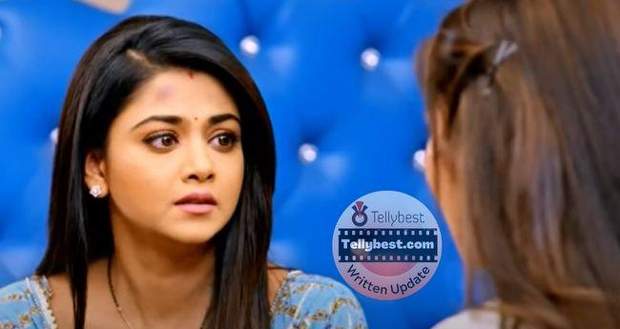 Today's Parineeti 12th December 2022 episode starts with Neeti entering the mall and looking around for Vishal.

When she does not find Vishal anywhere, she doubts if Vishal is here or not.

On the other hand, after looking through a rack of clothes, Vishal tells the shop owner that the clothes are pretty bad who urges Vishal to look at some new clothes.

However, Neeti finds Vishal at the same time and calls out to him but when Vishal turns, Neeti collides with a lady and falls to the ground.

Vishal who does not know Neeti thinks she must be a random girl and walks away.

Neeti again calls Vishal several times but when he does not turn, Neeti thinks of him as a very rude person.

On the other hand, after Pari helps Biji to sit on the rooftop, she gets a call from Rajeev, and Biji urges her to pick up the call.

Nodding her head, Pari picks up the call and informs Rajeev that Biji is with her so she replies yes and no only.

Later, outside the house, Pari informs Rajeev about Neeti seeing Vishal in the clothing store, and when Rajeev checks Vishal’s Instagram, he realizes indeed Vishal is in Chandigarh.

Rajeev then begs Pari to control the situation as he has a very important meeting now and cuts the call before Pari can say anything more.

While Vishal is busy in the changing room, Neeti thinks she will give him an earful for ditching Pari like this once he comes out.

Elsewhere, in Rajeev’s office, his boss praises Rajeev for making the company profitable but Rajeev is dwelling on Pari’s words.

After excusing himself from the meeting, Rajeev calls Pari to get an update who tells him that she is on her way to Neeti.

Enraged Rajeev yells at Pari for being late as his marriage is at stake which angers Pari and she reminds him that all this is happening due to his stupid mistakes.

She even growls that Rajeev does not deserve anyone’s sympathy who in return screams that Pari always blames him.

Angry Pari cuts the call and after calming down, Pari tells herself that she needs to find Neeti before she learns the truth.

Meanwhile, Neeti gets a call from Pari who orders her to come back without creating any scene but Neeti announces she will fix Pari’s marriage today.

While Neeti is busy on a call, Vishal walks out of the changing room and Neeti again misses the chance to talk to him.

Neeti again tries to follow Vishal but the security guard stops her saying she has a stolen item in her bag despite Neeti’s protest.

In the meantime, Pari is walking on the road when she notices a car following her and a car hits her.

However, Pari does not get hurt and while the driver apologizes to Pari, Rakesh arrives there and starts beating him.

Looking at Rakesh’s face, Pari tries to run away but Rakesh grabs her by her arm.

Pari again runs away after hitting him in the eyes.

© Copyright tellybest.com, 2022, 2023. All Rights Reserved. Unauthorized use and/or duplication of any material from tellybest.com without written permission is strictly prohibited.
Cached Saved on: Wednesday 25th of January 2023 05:46:37 PMCached Disp on: Wednesday 1st of February 2023 08:50:01 PM