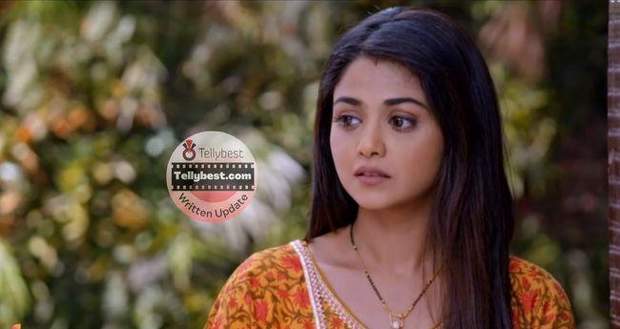 Today's Parineeti 12th January 2023 episode starts with Neeti calling Pari and telling her to come home as soon as possible as she has a surprise for her.

Pari asks Neeti what the good news is hearing Neeti’s excited voice but Neeti says that she will tell her once she comes back.

Pari tells Neeti that she will reach home in 15-20 minutes and hangs up.

Neeti calls Sanju the next while he is in the office and asks him to come home for a bit as she has a great surprise for him.

Sanju tells Neeti that he cannot just leave the office as he wishes but gives up as Neeti cutely requests him to come home for a bit.

After a while, Neeti reaches home with Vishal (the fake Rajeev) and makes him lie on the bed in his unconscious state.

Neeti asks Vishal to wake up quickly as she has numerous questions for him that she needs answers to.

Pari reaches home and gets welcomed by Neeti who brings her to the guest room where Vishal is present.

Pari gets shocked to see Vishal lying unconscious on the bed and asks Neeti what he is doing there.

Neeti narrates the situation in which she found Vishal unconscious after an accident and decided to bring him with her.

Neeti tells Pari that she can talk to Rajeev endlessly once he wakes up which leaves Pari nervous.

As Neeti goes out of the room for a while, Pari decides to call Rajeev and let him know about the situation.

Rajeev reaches home and helps Dadi in finding her glasses when Pari calls him and asks him to come to the guest room.

Rajeev comes along with Dadi toward the room leaving Pari in panic and she stops them outside the room.

Dadi asks Pari what she is doing there while Pari asks Rajeev to go inside and look at the album that they were looking for.

Pari brings Dadi to the living room and tells her that she was talking about their marriage album which makes Dadi excited and she also demands to see it.

Rajeev gets shocked to see Vishal there while Neeti comes and tells him that she brought him there.

Just then, Dadi comes inside with Pari and gets shocked to see Vishal lying on the bed.

As Neeti tells Dadi that Vishal is Rajeev, Dadi gets mad at her and tells her that Sanju is the real Rajeev and is married to Pari, whereas she is the outsider between them.

However, this turns out to be Rajeev’s dream and he drags Neeti inside the washroom as soon as Dadi and Pari enter the room.

Pari tells Dadi that Vishal is Rajeev’s friend while Neeti asks Sanju why they are hiding inside the washroom.

Neeti screams loudly on seeing an insect while Dadi proceeds toward the washroom door to check who is inside.

© Copyright tellybest.com, 2022, 2023. All Rights Reserved. Unauthorized use and/or duplication of any material from tellybest.com without written permission is strictly prohibited.
Cached Saved on: Wednesday 25th of January 2023 09:32:04 AMCached Disp on: Sunday 5th of February 2023 03:36:42 AM