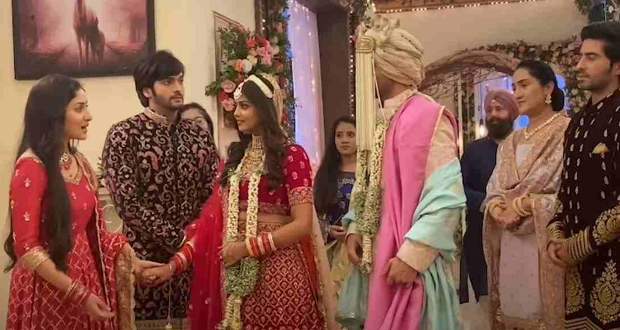 Today's Parineeti 12th July 2022 episode starts with Sanju and Neeti spending their first night together in the suite.

On the other hand, Mishika gets close to Parineet and gives her a tight hug as no one else shows her affection.

Further, Sanju asks for a kiss from Neeti as it is their first night together but Neeti gets playful and refuses to kiss him.

As Sanju is about to kiss Neeti he gets a call from Parineet which breaks the flow and Neeti leaves for the restroom.

On the other hand, the taxi driver escapes the police station and is determined to take revenge on Rajeev and Parineet.

Meanwhile, the thunderstorm proves to be a sign of fear for some and a romantic getaway for Sanju and Neeti.

Sanju initiates a kiss on Neeti's hand and pursues her towards the bed.

As a gentleman, Sanju helps Neeti to take off her anklets and looks at her passionately.

Neeti's emotions rise higher than the sea waves and the bold and bindass Neeti becomes submissive.

On the other hand, Parineet gets scared by the sudden arrival of the taxi driver while at the same time Rajeev appears out of nowhere and gets stabbed by the driver.

Parminder arrives to wake up Parineet and helps her to get over her nightmare.

Further, Parminder asks Parineet to call Rajeev and call him back home while Sanju is busy leaning toward Neeti's lips.

Sanju picks up Parineet's call and gives an excuse that he has met an accident which scares Parineet.

Later, Sanju carries on with his first night and is surprised to see Neeti in a veil and blushing.

Sanju confesses to Neeti that it was his dream to marry her and promises to never leave her side.

Neeti gets emotional and asks if Sanju will remain the same forever even after their honeymoon phase.

Promising Neeti his love and attention for a lifetime, Sanju says that he fell in love with her the minute he saw her.

Later, Neeti and Sanju talk about deep topics about life and their experiences.

© Copyright tellybest.com, 2020, 2021. All Rights Reserved. Unauthorized use and/or duplication of any material from tellybest.com without written permission is strictly prohibited.
Cached Saved on: Thursday 11th of August 2022 11:08:54 PMCached Disp on: Wednesday 17th of August 2022 08:00:47 PM