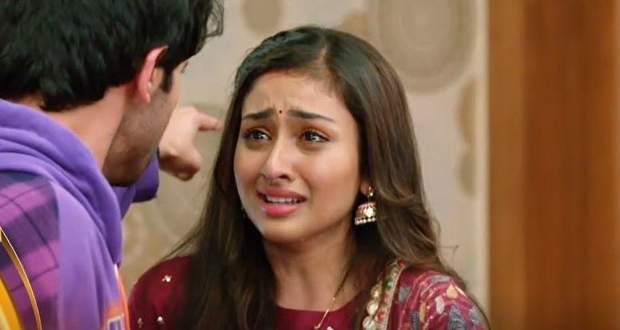 Today's Parineeti 12th May 2022 episode starts with Neeti preparing snacks for her family members while Chandrika fights with Amit for not taking her side in an argument with Simmi.

Later, Rajeev overthinks about Neeti's important friend while Parineet arrives and Rajeev offers her to help.

On the other hand, Vikram requests Simmi to take good care of Parineet as she is very innocent and naive.

Simmi is impressed by Vikram's request which changes her perspective toward him.

Parineet secretly looks at Rajeev but blushes while gazing at her husband's body.

Meanwhile, Pari asks Rajeev to send her friend the address of the Bajwa mansion which makes Neeti shocked.

On the other hand, Pari comes out crying out of her room and Rajeev follows her.

Neeti calls Vikram and asks for his help as her brother got into a fight with some people.

Meanwhile, Pari tries to explain the reason behind her tears but is hesitant.

Seeing Rajeev's raged anger and his discussion about another woman made her anxious and scared.

Later, Rajeev requests Parineet not to tell anyone anything.

Parineet saves Rajeev and forgives him by diverting the topic by saying that her father's death made her emotional.

Meanwhile, Mandeep scolds Pari for making everyone tense while Parminder assures her that Pari can never be mistreated in the Bajwa house.

Later, Gurpreet presents gold jewelry to Pari as a token of love but Parminder snobs about the jewelry design.

Meanwhile, Chandrika as usual tries to speak up which makes Parminder angry.

Parminder calls Simmi to hand over Chandrika's jewellery back.