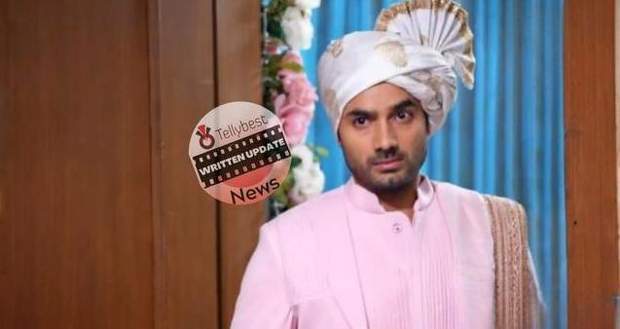 Today's Parineeti 12th September 2022 episode starts with Neeti telling Rajeev in the call that she wants to live with Rajeev in his house.

As soon as Neeti says it, Pari cuts the call and starts questioning Rajeev about how he can marry someone while being married to her.

Further, Pari accuses Rajeev of betraying her with her best friend Neeti.

While Pari is busy accusing Rajeev, Rajeev starts cursing himself for being careless as he is sure Pari must have seen him with Neeti in the hospital.

On one hand, Pari is accusing Rajeev of using Ajay during his marriage with Neeti; on the other hand, Neeti decides to call Pari to discuss about Sanju.

In the meantime, Parminder decides to confront Rajeev as she is sure Gurinder has used Pari for her own benefit.

Parminder then comes forward and asks Rajeev whether Pari is telling the truth or not.

Thinking the lie will backfire, Rajeev nods and tells Parminder indeed Pari and Neeti both are his two wives.

This triggers Parminder’s anger and she slaps Rajeev hard on the cheek.

On the other hand, Chandrika notices Neeti’s call on Pari’s phone and decides to pick up.

While Chandrika is telling Neeti that Pari is busy, Gurinder comes forward and starts blaming Pari by announcing that she thought Pari is innocent but Pari is manipulative.

Hearing this, Parminder orders Gurinder to close her mouth in an angry voice.

However, Neeti overhears the commotion and gets worried for Pari.

Meanwhile, Parminder starts questioning Rajeev if he loves Neeti then why did he marry Pari.

Hearing this, Rajeev starts blaming Gurinder as Gurinder is the one who forced him to marry Pari.

Gurinder who does not want anyone to think she is a bad person comes forward and announces she has done it to save Pari’s respect in the village.

As expected, Parminder orders Gurinder to close her mouth as she has destroyed Pari, Neeti, and Rajeev’s life for her greed.

While the commotion is going on, Pari runs away from there.

Seeing this, Parminder holds up her hand and announces that she will deal with Rajeev later as Pari needs her more.

Later while Pari is crying in her room, Parminder comes in and starts asking Pari if Neeti knows the truth.

When Pari replies that Neeti is like her shadow, Parminder tells her that shadow does not stay with us forever.

Parminder even tells Pari that she is here for Pari.