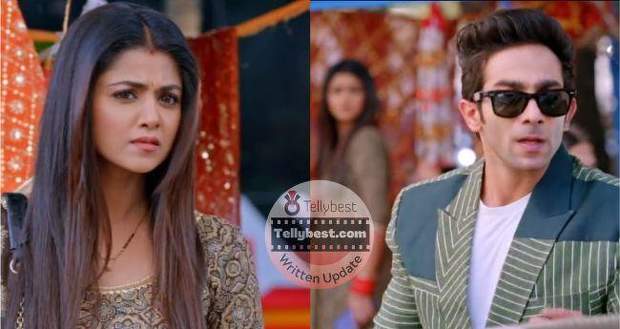 Today's Parineeti 13th December 2022 episode starts with Monty talking to an empty seat as if it is a girl.

He then notices Babli passing by and calls her “Chota Packet” (small packet).

When Babli turns to argue that her name is not that, Monty informs her that she turned after hearing this only so her name is Chota Packet.

He even asks Babli if she will go on a coffee date with him in loving voice and Babli nods.

While Babli and Monty are lost in each other eyes, Gurinder arrives there and orders Monty to stay away from any random girl in a stern voice.

After Gurinder walks away, Monty tells Babli that he was just practising with her since he has a date in the evening.

On the other hand, in the mall, the manager tells Neeti that he needs to see her id and Neeti informs the manager that she is a daughter-in-law of a respected family.

The manager, however, informs Neeti that he needs to see the ID card otherwise he will be forced to call the police.

Hearing this, worried Neeti calls Pari for the Id card but Pari’s phone is not reachable and when she calls Rajeev, Rajeev does not pick up as he is scared Vishal must have revealed the truth to Neeti.

Meanwhile, Pari is running for her life and she notices a temple so she hides there while breathing heavily due to panicking.

While Pari is hiding behind a pillar holding her breath, Rakesh arrives there and starts yelling in a creepy voice that his Pari is a traditional girl so she must be here only.

He even announces that he wants to take Pari away to a faraway city where he will become MLA and Pari will stay as his wife.

When Rakesh looks away, Pari quickly hides behind another pillar while continuously praying to god to save her.

Rakesh who was standing right beside that pillar surprises Pari with an evil grin and Pari looks terrified.

Elsewhere, Rajeev calls back Neeti who informs him about the ID and he arrives at the mall in a just few minutes.

After viewing the ID, the manager lets Neeti and Rajeev go and Neeti explains to him how she saw Vishal but even after a lot of calling his name, he did not turn back.

Rajeev feels relieved after finding out his secret is saved and scolds Neeti for always risking her life for Pari.

Neeti orders Rajeev not to talk about Pari this way and Rajeev just walks away.

Meanwhile, in the temple, Pari hits Rakesh with a temple bell which causes him to stumble and Pari runs away from there.

Later, during the car drive, Neeti tries to melt Rajeev’s anger so she grabs his arm but Rajeev orders her not to do it.

Neeti then fakes her stomach ache and Rajeev like a concerned husband starts taking care of her.

Neeti orders Rajeev to bring an ice cream for her and when Rajeev walks away, she starts dreaming about spending quality time with Rajeev in a well-decorated park while both of them wear black and slow music plays in the background.

She however comes back from her dream with a jolt and smiles at herself.

On the other hand, angry Rakesh growls that he will take revenge on Pari by any means.