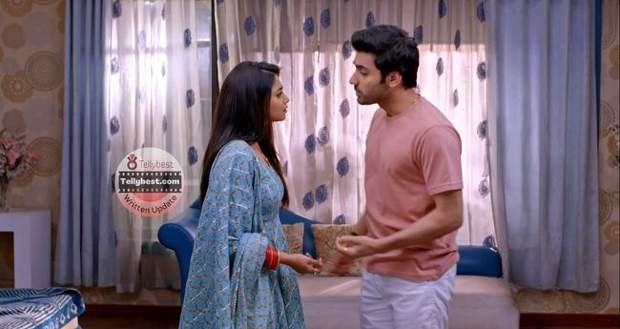 Today's Parineeti 13th January 2023 episode starts with Dadi knocking on the washroom door and asking who is inside to which Rajeev answers that he is taking a bath inside.

Dadi says that she heard a girl’s voice and asks Rajeev to open the door without making any excuses.

However, Pari distracts Dadi with her words and takes her out of the room leaving Rajeev and Neeti alone in the washroom.

Neeti asks Rajeev to let go of her as she needs to take a look at Vishal whether he has woken up or not.

Rajeev stops Neeti by hugging her and puts her under the shower so that Neeti cannot go outside and talk with Vishal.

Vishal wakes up in the meantime and gets confused to find him in some stranger’s house.

Pari comes into the room and asks Vishal if he is fine and lets him know that Neeti brought him there after he got into an accident.

At the same time, Rajeev turns on the shower and makes both him and Neeti wet as he cannot let Neeti go outside.

Rajeev pulls Neeti closer to him and plants a gentle kiss on her nape making her shiver with the tension residing there.

Neeti tries to back out but Rajeev pulls her into a hug while nuzzling his face in her shoulder.

However, Neeti punches Rajeev in his stomach and says that she needs to talk to Rajeev or else he will vanish again.

As Vishal was about to leave, Neeti asks him to stop and says where he is going when his wife is here.

Vishal stands confused and asks Rajeev to stop signaling him as Rajeev tries to pacify Vishal into going along with Neeti.

Neeti asks Vishal why he is not living with Pari when she is his wife and having an affair with another woman which is illegal.

Vishal asks Rajeev to end this matter by telling the truth as he is getting extremely irritated by Neeti’s words.

Rajeev attempts to send away Vishal but Neeti says that he will not go anywhere without taking Pari with him.

Vishal says that he does not care about Pari which makes Neeti angry and she says that she will call the police.

Suddenly, Vishal starts laughing and says that he was putting up a drama to test Neeti as a friend.

Vishal hugs Pari from the back and tells her that he missed her very much while Rajeev throws daggers at Vishal with his stare.

A flashback shows Rajeev and Pari visiting Vishal and asking for his help after explaining the whole situation to him.

As Vishal goes to the side to talk to someone on the phone, Neeti hugs Pari and says that she is very happy that Pari is going home with her Rajeev.

However, Vishal comes and informs that he has to go to Istanbul the next day for work and requests Neeti and Rajeev to take care of Pari for some more time.

Neeti says that Vishal and Pari have to go on a romantic dinner date together to which Vishal agrees.

After Neeti leaves, Rajeev thanks Vishal for his help while Vishal says that he did everything for Pari’s sake.