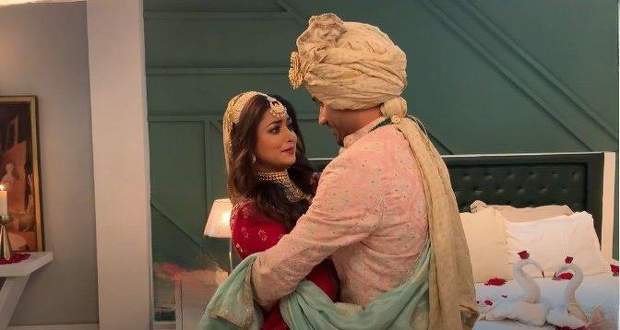 However, Parineeti tries to call Rajeev and worries about him when he does not pick up the phone.

Parineeti decides to go to the place of the accident but Tayiji catches her and stops her from leaving in such rain and thunder.

Meanwhile, Neeti tells Rajeev that Pari also wanted a life partner like him.

Rajeev gets worried thinking of Pari.

Neeti is unaware of the betrayal and hugs Rajeev.

On the other hand, Pari decides to go to the place of Rajeev's accident because she cannot rest without making sure he is alright.

Meanwhile, Neeti talks about Pari and tells Rajeev that Pari has done everything for their wedding.

Neeti tells Rajeev that Pari is equally important to her life and he will have to share her with Pari.

Rajeev is shocked to hear that Pari is Neeti’s friend while Neeti tells Rajeev how much Pari loves her husband or he loves Pari.

Rajeev tells Neeti that someone loves to get free.

Neeti tells Rajeev that Pari’s husband has left him after Pagphera but Pari and her father had complete trust in him.

Rajeev feels bad hearing about Pari’s struggles after he left her and feels guilty for marrying Neeti.

Meanwhile, Pari arrives at the location where Rajeev had an accident.

A Paan seller tells her that one person is gravely injured but tells his wife that he has minor wounds.

On the other hand, Neeti encourages Rajeev to get romantic on their wedding night and kisses him while he is distracted.

Rajeev chases Neeti into the room to get close to her and falls on the bed together after getting tired.

Later, Rajeev brings Neeti close to her and they are lost in each other eyes.

In the meantime, Pari is trying to get a lift or auto to get to Rajeev as quickly as possible but is failing miserably.

At the hotel, Neeti and Rajeev play a game of cat and mouse until Rajeev captures her again in his arms and is about to kiss her when the mobile ring disturbs them.

Neeti tries to call back but the network is poor while Rajeev accuses Pari of being Neeti’s enemy for disturbing them on their wedding night and spoiling their mood.

Understanding Rajeev’s disappointment, Neeti stops him and hugs him meaningfully.

Meanwhile, Pari arrives at the Neeti hotel just when Neeti takes off Rajeev’s shirt and gets close to him.

© Copyright tellybest.com, 2022, 2023. All Rights Reserved. Unauthorized use and/or duplication of any material from tellybest.com without written permission is strictly prohibited.
Cached Saved on: Monday 21st of November 2022 04:45:25 AMCached Disp on: Friday 9th of December 2022 06:16:56 PM