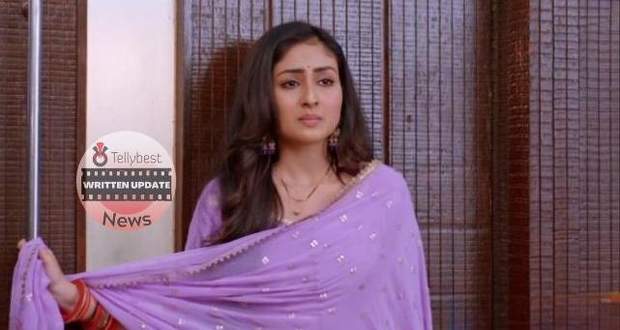 Today's Parineeti 13th October 2022 episode starts with Parminder telling Pari that she cannot watch Pari being sad all the time and she cannot even do anything due to Pari’s promise.

Meanwhile, in the room, Neeti urges Simmy joyfully to take her quickly to the function.

Simmy tries to stop Neeti but Neeti walks away regardless.

On other hand, Chandrika calls Simmy so Simmy can keep Neeti busy till she takes Pari away.

Chandrika gets stressed when Simmy reveals that Neeti has gone to the hall without caring about Simmy’s words.

Simmy even adds that Neeti is nothing like Pari who obeys everyone without question.

Meanwhile, Parminder informs Pari in frustration that she cannot expect Simmy’s future in-laws to respect Simmy when she cannot give the same respect to Pari.

Pari calms down Parminder by telling her that she is glad to get a mother-in-law like her.

Monty on the other hand teases Rajeev by informing Rajeev that his mouth is still smelling like alcohol.

Rajeev gets shocked but noticing Monty’s smile, he walks away.

Rajeev then drags Pari to the dance floor and starts dancing with her.

While everyone joins the dance floor, Parminder looks sternly at Rajeev.

On one hand, Neeti is coming toward the hall; on the other hand, Chandrika drags Pari away.

Neeti gets angry when she finds Rajeev enjoying himself without her.

Noticing Neeti walking away, Rajeev stops her and Neeti gets angrier when she realizes Rajeev has consumed alcohol.

Rajeev quickly tells Neeti that he is very happy but Neeti walks away.

Rajeev later goes to his room to apologize to Neeti and announces he loves her very much without checking if it's Neeti or Pari.

He further expresses his sympathy towards Pari and ironically says that he cannot believe how can someone betray a sweet girl like Pari.

Pari who is staring out of the window gets stunned after hearing the love confession.

When Rajeev tries to lock his arms around Pari from the back, she turns around and pushes Rajeev away.

Looking at Pari, confused Rajeev question her about what she is doing here but instead of answering, Pari yells at Rajeev for lying to Neeti.

She further adds that she is doing her job of keeping the Bajwa family's respect and she gets into an argument with Rajeev.

Neeti arrives at the same time and Rajeev and Pari close their mouth.

After Rajeev walks away, Neeti questions Pari why Pari is wearing the same dress as her but Pari lies that Simmy has brought this dress for her since they are sisters and Neeti hugs Pari after hearing this.

Later, while Gurinder is busy bragging about Neeti to her friends, Pari feels worse and decides to leave.

© Copyright tellybest.com, 2022, 2023. All Rights Reserved. Unauthorized use and/or duplication of any material from tellybest.com without written permission is strictly prohibited.
Cached Saved on: Monday 21st of November 2022 07:45:33 AMCached Disp on: Thursday 1st of December 2022 11:20:45 AM