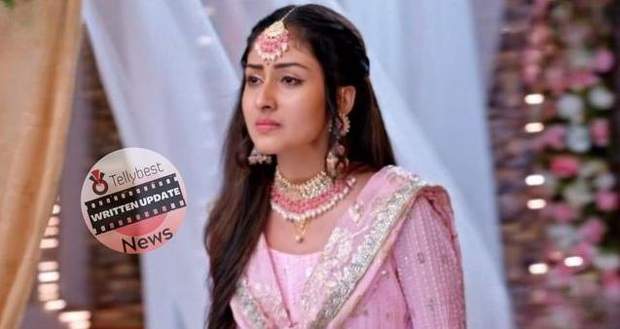 Today's Parineeti 13th September 2022 episode starts with Pari telling Parminder that Neeti is like a shadow to her who will never leave her.

Hearing this, Parminder informs Pari that even shadows leave people during nightfall.

However, Pari denies it by stating that Neeti will never walk away from her.

Meanwhile, in the hospital, worried Neeti decides to go to Pari’s home as she is sure Rajeev is torturing Pari.

When Neeti opens the door, a nurse stops her and starts urging Neeti to stay in the hospital till Neeti gets better.

As expected, Neeti ignores the nurse and starts walking away.

Back in Bajwa house, Parminder calms Pari down and asks Pari what she is going to do with Rajeev.

Hearing this, Pari urges Parminder for advice, and Parminder announces that if her husband has done it then she would have given him one more chance if her husband promises to let go of the second wife.

Looking at Parminder with teary eyes, Pari informs Parminder that she will never forgive Rajeev because Rajeev has betrayed her best friend Neeti.

Pari even adds that she is going to reveal her announcement to everyone now.

Elsewhere in the hospital, Neeti collides with Monty who informs her that he is here to check on Neeti on behalf of Sanju.

Hearing Sanju’s name, angry Neeti orders Monty to inform Sanju to stay away from her.

Before leaving, Neeti announces that her friend needs her right now.

However, Neeti faints near the reception and the doctor starts checking her.

In Bajwa house, seeing Pari coming towards the hall, Rajeev smirks to himself and decides to teach Pari a lesson.

Even Gurinder thinks of taking revenge on Pari for ruining her and Rajeev’s reputation.

However, Rajeev’s hopes are shattered when Pari again starts accusing him of being ignorant.

Afterward, Pari announces that she is breaking her marriage with Rajeev.

Hearing this, Chandrika tries to change Pari’s mind by saying that Rajeev will do anything to save the marriage but Pari ignores it.

After Pari leaves to pack the things, Parminder orders Gurinder not to interfere in Pari’s decision.

Further, Parminder announces that Gurinder is responsible for Pari and Rajeev’s broken marriage.