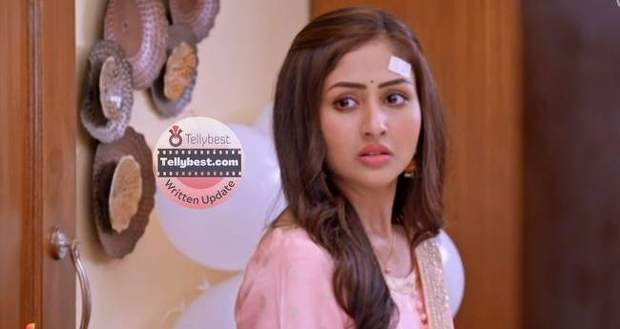 Neeti even reminds Rajeev that this date night is for Pari and Vishal (fake Rajeev) so they will make an appearance and nothing else.

Hearing this, Rajeev firmly announces that he does not need to change but Neeti starts chasing him around while yelling at him for not listening to her.

During the chase, Rajeev pulls Neeti under the blanket who urges him to let her go as they are late.

Afterward, when they reach the terrace, they find Pari and Vishal sitting in awkward silence.

Rajeev thinks Pari and Vishal must be staring at the sky for thirty minutes whereas Neeti tells him that she doubts Pari and Vishal are not married to each other causing Rajeev to look at her with a panicked expression.

Neeti however adds that Pari should have known fake Rajeev better and she thinks Pari and fake Rajeev’s issues are yet not resolved.

Suddenly Vishal starts talking to Pari sweetly and Pari gets surprised to see this.

Pari looks at him with a baffled expression but Vishal tries to tell her about Neeti watching them in a low whisper but Pari is not able to understand.

Holding Pari’s hand awkwardly, Vishal pulls his chair a bit close to Pari to feed her food while Pari stares at him with wide eyes.

Neeti is gushing seeing Vishal’s efforts whereas Rajeev is shooting daggers at Vishal since he is feeling jealous.

When Vishal tells Pari about Neeti watching them from a distance so they need to act, Rajeev interrupts them.

Vishal compliments Neeti for such an amazing dinner, and Neeti orders Vishal to promise her that he will never leave Pari.

Vishal’s hands start shaking when he puts his hand in Neeti’s hand to promise her and Neet offers to arrange Pari’s ticket so she can also go with him.

However, scared Vishal lies that he will always be busy with work so Pari will feel alone which convinces Neeti and she gets busy with Pari.

At the same time, Rajeev takes Vishal aside to thank him for his help but Vishal announces that he cannot understand how Rajeev did not fall in love with Pari.

When Vishal mentions that he feels bad for giving Neeti hope knowing he cannot fulfill it but Rajeev calms him down by saying that Vishal meeting Neeti is very rare.

Later that night, Rajeev walks away after informing Neeti about his late-night meeting and when Neeti asks him if he is having affair with anyone, Rajeev teases her saying that he is dating his boss's wife.

Afterward, Neeti gets sad thinking Rajeev does not remember their anniversary and she even tries to call him but he does not pick up.

When Rajeev enters the room again, Neeti surprises him with cake but Rajeev orders her to come out with him.

Once they come out, Neeti gets happy to see the car beautifully decorated with balloons and rose petals on the bed.

When she turns, she finds Rajeev kneeling who sweetly tells Neeti how much this day means to him with love in his eyes and Neeti hugs him.

After that, Neeti and Rajeev enjoy their time together, and Rajeev showers Neeti with her favorite food and gifts.

© Copyright tellybest.com, 2022, 2023. All Rights Reserved. Unauthorized use and/or duplication of any material from tellybest.com without written permission is strictly prohibited.
Cached Saved on: Wednesday 25th of January 2023 02:38:00 PMCached Disp on: Wednesday 1st of February 2023 06:19:15 PM